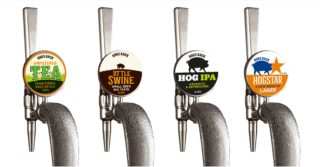 The new range is Hogs Back’s biggest NPD launch since it introduced Hogstar in 2013 and reflects the brewer’s forward-looking approach to its portfolio, evolving it to meet the demands of younger drinkers, who generally favour keg beers, while also satisfying the many loyal drinkers of its cask beers, particularly TEA (Traditional English Ale). TEA has enjoyed impressive growth over the last year despite the decline in the cask market, and remains Hogs Back’s flagship beer.

The design for all four beers is clean, modern and eye-catching. While each beer has its own distinctive look, they are clearly part of the Hogs Back family, which will encourage consumers to try beers across the range.

The new designs are initially being launched on impactful draught founts before being rolled out to packaged product later this year – Hogstar in bottles and cans and Hog IPA in cans. Packs for Little Swine and Unfiltered TEA are to be confirmed.

Rupert Thompson, Hogs Back managing director, said: “We’re delighted with our new keg beer family. Although we’ve been brewing great keg beers, including Hogstar lager, for some years, we’ve been seen more as a cask brewer, thanks to the success of TEA.

“That all changes now as we launch new beers into fast-growing sectors of the market – low ABV, unfiltered and IPA – and present them alongside Hogstar lager. We’re confident our keg beers will compete in modern craft beer bars, as well as finding a place in more traditional pubs already stocking Hogs Back’s cask ales, particularly TEA.”

Hogs Back Brewery will be on Stand 91 at Craft Beer Rising with a distinctive, specially designed Hop Garden Bar. Craft Beer Rising takes place at the Old Truman Brewery in London’s Brick Lane from 21 to 23 February.

4.5% ABV lager brewed with special lager malts and five different hops from the UK – including English Cascade from the Hogs Back hop garden – Europe and USA. A small quantity of natural herb extracts is added before Hogstar is left to mature for over a month. The result is a beer that has all the crisp refreshment of a lager, but with a greater depth of flavour and aromas.

An unfiltered version of Hogs Back’s flagship TEA (Traditional English Ale), a full-bodied bitter, brewed in small batches using English malt carefully balanced with Fuggles hops, some of them from the Hogs Back hop garden.  Cold-conditioned for 1 week and unfiltered for optimal flavour.

4.5% ABV light, hoppy ale with a blend of floral and fresh citrus notes upfront, well-balanced with a long, dry finish. Hog IPA is brewed with a selection of fine English malts and locally grown Cascade and Fuggles hops, alongside US Centennial.

A new 2.8% ABV dry-hopped aromatic blonde beer – billed as a ‘Small’ Beer with a Big Taste. It is brewed with a carefully selected blend of aroma hops including home-grown Cascade, and then dry hopped for additional aroma and flavour. No and low alcohol beers have grown by 22.7% volume and 24.3% value over the past year, according to CGA.