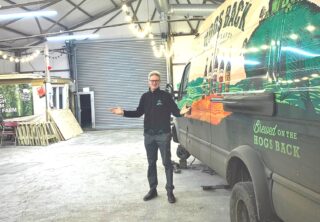 Surrey-based Hogs Back Brewery has stepped up to the national COVID-19 vaccination drive, offering its Hop Hangar as a drive-through facility for people in the area to receive the life-saving jab.

The brewery’s offer is currently being assessed by the Local Resilience Forum, the alliance of councils, police, NHS and other strategic partners which is co-ordinating the response to the COVID-19 pandemic in Hogs Back’s Surrey and Hampshire heartland.

By opening up the large doors at either end of the Hangar for vaccine recipients to drive through, and housing the medical staff and chilled vaccines in the adjacent Tap Room bar, Hogs Back believes the brewery site in Tongham offers an ideal space for the vital programme.

Rupert Thompson, managing director of Hogs Back Brewery, says, “We’re offering the Hop Hangar as our contribution to the vaccination roll-out, and we’ll work with the Local Resilience Forum to ensure we can meet its requirements.

“Our brewery is in a location well served by main roads, and we believe it would be very effective as a drive through facility. We think people might not even need to get out of their cars to be injected, although that’s for the organisers to decide, and it can all be done under cover. We have fridges for the vaccines, and rooms for the medical and support staff.

“We can even offer those who’ve been vaccinated a cup of tea afterwards, and for the staff manning the site, we’ll also provide a free bottle of our very own TEA – our flagship Traditional English Ale – for them to enjoy once they’re off duty.

“As far as we know, we’re the first brewer to offer a vaccination space. With the whole of the UK now getting behind the programme, we’re keen to play our part and support our friends and neighbours.”

The Hogs Back Hop Hangar opened in the summer of 2020 as a facility to process the harvest from the Hop Garden adjacent to the brewery, and at other times operates as a bar and function space.