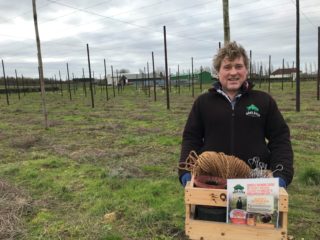 Pub gardens across the south east will be blooming with aromatic hops thanks to a giveaway of English Cascade plants from Surrey-based Hogs Back Brewery this spring, to mark the relaunch of its Surrey Nirvana Session IPA.

Hogs Back is supplying pubs with a Cascade growing kit of hop ‘plug’, string and canes to support the bines, a display tag and a simple guide to cultivation. Kits are being offered to any pub ordering two or more casks of Surrey Nirvana, which Hogs Back is relaunching this month as Surrey Nirvana Session IPA.

The 4% ABV golden cask ale has a new, more hop-intense flavour, achieved by adding more of the English Cascade hops grown on its own hop garden, and a deep tropical aroma from the combination of US Mosaic and Centennial hops. The brand is also being given a new pump clip design that delivers more standout on the bar and clearly communicates its ‘Session IPA’ positioning.

Hogs Back managing director Rupert Thompson said: “We’re delighted to be offering up to 200 hop plants to pubs in our local area and looking forward to seeing the results in their gardens later in the year.

“The English Cascade is a wonderful hop variety, with a distinct aroma of spicy citrus notes and hints of grapefruit. It has thrived in the Hogs Back hop garden since we first planted it in 2014 and we’re delighted to be sharing it with our customers as a way of reinforcing the centuries-old link between hops, beer and pubs.”

He added, “We chose the name Surrey Nirvana many years ago, with the idea that a pint of this golden ale represented a little bit of nirvana, or heaven, in a Surrey pub. So with this hop giveaway, we’re extending heaven from the bar into the pub garden!”

Surrey Nirvana is one of Hogs Back’s best-sellers, with well-balanced hoppy and citrus flavours. Additional hops have been added to capture the style of a session IPA, a beer style which has the classic hop forward character drinkers now expect from an IPA, but with a lower ABV and more balanced palate to make it more sessionable.

Hogs Back expanded its hop garden last year, and planted more of the Cascade which is used in its Hogstar lager, Hog IPA and other bottled beers, as well as Surrey Nirvana.

Thompson added, “For pubs, the chance to grow their own display hops is in keeping with the growing consumer demand for sustainable, locally sourced food and drink that has seen many pubs create their own kitchen gardens. We expanded our hop garden in order to become an even more sustainable, environmentally-conscious brewer. The hops we grow have a fraction of the carbon footprint of importing from the US – justifying our claim of ‘field to firkin in a furlong’.

“Growing our own hops also makes us better brewers. With each harvest we’ve learned more about how the flavour of the hops is affected by the weather and growing techniques, and how that then impacts the quality and taste of the beer.

Pubs who successfully cultivate their Cascade hop will see the growth cycle from hop shoots – which appear in March or April and are also known as ‘poor man’s asparagus’ for their culinary qualities – through to fully mature plant standing at 16-18 feet by midsummer. Plants flower, then produce the hop cones that are harvested in late August-September, and used in brewing. The plants die back in the winter and then regrow in the spring. They send down roots that can extend for 12-14 feet, and they last for 20-30 years with relatively little care.

This is a well-balanced Session IPA using the very best hops that Surrey and the West Coast of the USA have to offer.  It has a distinctive aroma blending citrus and tropical notes with a clean, dry finish.

Surrey Nirvana is brewed with English Cascade and Farnham White Bine hops, both grown on Hogs Back’s hop garden, and complemented with US Mosaic and Centennial hops, added late in the brew to give add the grapefruit high notes that are characteristic of modern IPAs.

Based on analysis of all draught ales, CGA figures to December 2019 show the collective performance of products that are described as IPA/India Pale Ale in their brand name are outperforming the draught ale market overall. Collectively, IPAs have over 10% of all draught ale volumes in the GB on trade.

Pioneered in the 1950’s at Oregon State University, Cascade was the product of cross breeding of a form of English Fuggles hops and wild American hops and has since gone on to become one of the most popular American hops of all time, representing around 10% of all hops grown in the US. Named after the Cascade Range mountains that run from northern California all the way north to British Columbia, it has a distinct aroma which has spicy citrus characteristics with hints of grapefruit.

Hogs Back planted Cascade in its hop garden in 2014, as a way of adding the variety’s delicious citrus aroma to its beers, while creating only a fraction of the carbon footprint of importing them from the US.  The plants took remarkably well to the rich, chalky soils of the North Downs and have flourished in the Hogs Back hop garden, despite being at a significantly higher latitude than its American counterparts. English Cascade can be found in Hogstar lager, Hog IPA, some of its bottled beers and Surrey Nirvana.