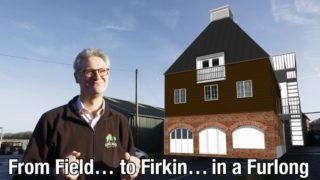 Hogs Back Brewery is building a new hop kiln on the brewery site at Manor Farm in Tongham, Surrey as the brewery continues its significant investment programme.

This large-scale project is believed to be the first traditional style kiln to be constructed in the county for over 100 years. It will cost £350,000 to complete, taking total investment in the brewery and hop garden over the last 12 months to £700,000.

The kiln, which will be operational ahead of Hogs Back’s harvest in September, is being built just yards from their brewhouse and their new, much larger hop garden. It will stand on the site occupied for many years by an original kiln within Manor Farm and will be used to dry Hogs Back’s hops for around one month a year. For the rest of the year, it will serve as an event space and visitor centre, educating people about the local hop farming industry which Hogs Back is helping to revive.

Siting the kiln so close to the hop garden and picking machine means hops can be dried immediately after picking. Hogs Back is also investing in state-of-the-art vacuum packing technology to capture the hops’ freshness, with the aim of having them packed within 24 hours of picking. Once packed, hops will be stored in optimum conditions in a new warehouse, to be housed in a converted barn on the farm.

Hogs Back Brewery managing director Rupert Thompson said, “A £700,000 investment, at a time of some uncertainty in the beer market, speaks volumes for our long-term commitment to brewing in Surrey.

“Hogs Back is the biggest hop-growing brewer in the UK and this expansion with the larger hop garden and new kiln will make us an even more sustainable, environmentally-conscious business: our hops will be travelling from field to firkin in just a furlong (220 yards). Combined with our new vacuum packaging facility, it means we will have the freshest, best quality hops, which in turn ensures consistently top quality and flavour for our beers.”

He added, “Hogs Back is one of a growing number of ‘farm brewers’ in the UK; brewers who have been founded on a rural, farming heritage that gives them a deep understanding of the ingredients used in brewing. We believe there is a swathe of craft beer drinkers who relate to our values of authenticity and local community.”

Hogs Back’s new hop garden occupies 8.5 acres of prime farmland on Manor Farm, and work started last autumn to prepare it for the 2019 growing season, with anchors, posts and several miles of hop wire now in place. 2,000 hop plants were lifted from the old garden and a further 4,000 new ones planted. Three varieties are being grown on the new site: Fuggles, Cascade and Farnham White Bine.

Thompson said, “We are excited about continuing the journey we started with the planting of our original hop garden in 2014, and, through the new visitor centre, sharing our passion for hop growing with the wider community.

“Growing our own hops has made us better brewers, as with each harvest we’ve learned more about how the flavour of the hops is affected by the weather, and how that then impacts the quality and taste of the beer. It has also drawn us closer to the local rural community and its history, and gives us a unique opportunity to accentuate the provenance and quality of our beers.”

Caption to attached image: Rupert Thompson, Hogs Back Brewery MD, with an artist’s impression of the new kiln

To view a short film showing Rupert Thompson with a graphic representation of the investment at the brewery, including the new kiln, visit https://youtu.be/f3G1TAiwKgA