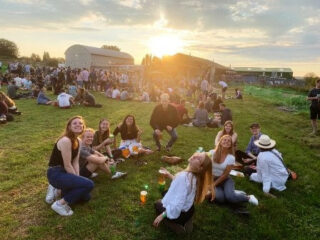 Guests enjoy sunset next to the hop garden

Event brings local community back together after Covid

The Hogs Back Brewery Hop Harvest celebrations bounced back bigger and better earlier this month after an absence last year due to Covid.  For the first time, festivities at the brewery in Tongham spilled over two days to meet public demand, with a festival-style music-led party on the Saturday and a more family-friendly event on the Sunday. Around 2,500 people attended over the weekend.

In another ‘first’, the party took place half way through the harvest rather than at the end, as this year’s hop crop has been the largest since the Hogs Back planted its first hop garden in 2014. This meant that despite hard work by the Hogs Back team including their 20 volunteer Hoppers to bring in the hops, harvest had to stop for the party, and then restart on the Monday morning.

Rupert Thompson, Hogs Back MD, said: “Pausing harvest to hold our Party was a nice problem to have as it’s the result of our bumper hop crop this year. After the last 18 months of on-off socialising, everybody was ready for a party, whether that meant dancing the night away with a beer or two, or enjoying the great children’s entertainment.

“Our Hop Harvest parties have always involved the local community and we were delighted with their support again this year. Hop farming is an important part of Farnham’s history and we’re happy to have brought it back and to celebrate with local residents.”

Guests enjoyed the full range of Hogs Back beers, including Green TEA, the brewer’s flagship TEA brewed with fresh ‘green’ Fuggles hops, a harvest tradition.  Food on offer included a Hog Roast, burgers and Hair of the Hog hot dog, all supplied by local butcher Alf Turner, as well as cream teas and ice cream from Loseley Bakery.

The music lineup included a range of performers including a number of local bands. Headliners  Fleetwood Bac and Morganway as well as another half a dozen acts including Coco and the Butterfields and Peach & the Prairie Dogs took to the stage in the brewery courtyard to create a fantastic music-fest vibe for revellers.

Familes enjoyed a busy programme of activities included mobile farm Farms2Ewe, Fred in the Shed magic show and dray rides around the hop garden with Sovereign & Bowler, two Suffolk Punch horses who had helped out with harvesting earlier in the month. Children and adults took part in the hat decorating competition, using freshly cut hops to create eye-catching headwear.

Several local groups helped to manage the event, with volunteers from 4th Farnham (Tongham) Scout Group Scouts manning the car park and Kids Zone, and local charity Hedgehogs providing marquees.  Supporting local charities has always been part of the Hop Harvest celebrations and of Hogs Back’s ethos generally, and the parties raised £600 for Wooden Spoon, the children’s charity of rugby, based in Fleet, in memory of Hogs Back team member, Nick Burne, who had been a supporter.

Thompson said, “This was our sixth Hop Harvest Party and our best ever, in part because we hadn’t celebrated for two years, so it was a real delight to meet with friends again.  We were blessed with good weather and our guests had a fantastic time drinking beer, listening to some wonderful music or taking part in our activities.

“A big thank you to all the local businesses and volunteers who put in a huge amount of time and effort to make this year’s Hop Harvest celebrations such wonderful events.