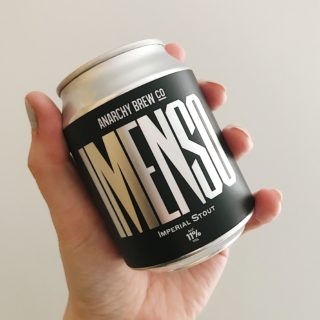 Anarchy Brew Co. today launches its latest beer in 250ml mini cans. IMENSO is an 11% imperial stout, made with Amburana wood from South America. The beer is a collaboration project with Rubens Angelotti from Blend Bryggeri in Brazil, and was brewed when Rubens visited Anarchy Brew Co. in August this year.

Amburana wood has been gaining popularity across the globe, due to its spicy aroma, and the relatively short period of time that beer needs to be exposed to the wood in order to take on the warm, spicy, cinnamon notes. The winner of the Wood-Aged Strong Stout category at the 2018 Great American Beer Festival contained Amburana wood, and was something Rubens was keen to introduce to the Anarchy team when he visited the UK.

Simon Miles, Co-owner of Anarchy Brew Co. said “Dawn and I stayed with Rubens over in Brazil earlier in the year, and we brewed Deadly Milk (a mango milkshake IPA) while we were there, so for the return leg of the collab. it was great to work together to create something totally different. The whole team really enjoyed Rubens’ visit, and this partnership was fantastic for cementing new friendships as well as bringing together knowledge from across two countries!”.

The beer launched in keg at the weekend at Craft Beer Calling at Wylam Brewery, and after a fantastic response from customers, the 250ml mini cans launch today from 5pm in selected independent bottle shops in the North East.

Daisy Turnell, Marketing Manager at Anarchy Brew Co. said “We’ve loved watching the journey of this beer, and its been a collaboration in the truest sense of the world, with ingredients native to one brewery coming together on a different continent to make the beer in another. It was important to us to launch this in the north, so Craft Beer Calling was the perfect opportunity, and supporting our local independent bottle shops to launch the brand new mini cans was equally as important to us”.

Follow Anarchy Brew Co. on social media for updates on the event:

About Anarchy Brew Co
Anarchy Brew Co. started life back in 2012 in Morpeth, Northumberland, and has built up a reputation for producing quality beers packed with well-balanced flavours. Following on from the success of core beers such as Blonde Star and Citra Star, the brewery has expanded over the past seven years to creating more iconic beers, in keg, cask, and their new 440ml cans.

October 2018 saw the brewery move to a bigger site in Walkergate, Newcastle upon Tyne, with the addition of a new taproom playing host to tap takeovers, brewer meet-ups, gigs, DJ sets, and other popular events every Friday and Saturday.

Beers from Anarchy Brew Co. can now be found across the globe, proving popular in Russia, Italy, Finland, and many other countries, and with recent collaborations with 7 Fjell Bryggeri (Norway), plus several more in the pipeline, the brewery continues to go from strength to strength, ably assisted by the incredible artwork of designer Josh Tinsley (Studio Tinsley), plus collaborations with Exile Cycles in the US, and local UK artist, Ryan Roadkill.