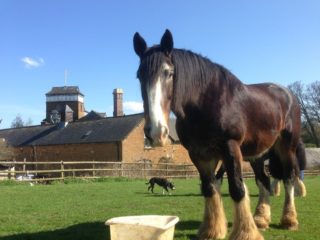 Hook Norton Brewery have brewed a unique beer to celebrate the life of Major, their shire horse who sadly recently passed away. This gentle giant had worked loyaly at the brewery for 16 of his 22 years, helping deliver beer the traditional way to the local pubs as well as parading with his trusted partner Nelson at various events and shows across the U.K.

Over the years, Major was kept busy not only delivering beer but also doing T.V work with Penelope Keith in her Hidden Villages series and ferrying Griff Rhys Jones around in Griff’s Great Britain. In 2014 he even appeared on a Royal Mail Stamp in a special edition featuring working horses. He was a firm favourite with all the staff and visitors to the brewery and will be sorely missed.

Major Force 4.5%, This dark red ale is a heavy contender (just like Major!) packed full of dark fruits and aromas, with a mild sweetness to “pull” the beer together.

Hook Norton Brewery Managing Director James Clarke said: Major had a good working life, and delivered countless barrels of beer. As well as this, he was the subject of many photographs, press articles and TV.  But perhaps most importantly he was a great friend to Roger and Elizabeth, and met so many of our visitors, bringing happiness to so many. He is sadly missed, but very fondly remembered, and this beer brewed in his honour will be available in the week leading up to and at The Hook Norton Festival of Fine Ales, an event which Major attended over many years. We’ll raise a glass to Major, and 50 pence from every pint will be donated to The Shire Horse Society.

Major Force will take pride of place in the breweries selection of beers at the upcoming Hook Norton Festival of Fine Ales on Saturday July 20th from 12 noon. Tickets available on the day – just turn up and enjoy!