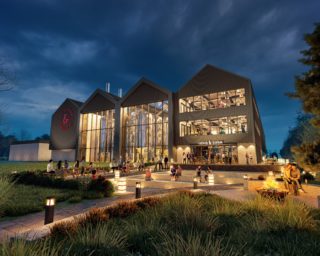 First major brewery in Edinburgh for over 150 years

Scottish craft brewer Innis & Gunn has announced Heriot-Watt University’s Research Park to the west of Edinburgh – home to the world-renowned International Centre for Brewing & Distilling – as the location for its new brewery. Subject to planning permission and further corporate and regulatory approvals, it will be the first major brewery to be built in Edinburgh for 150 years.

The tie-up is the UK’s first major collaboration of this type between a full-scale brewery and a university and will create a centre for brewing studies and applied learning on the world stage.

The collaboration will be on a par with other famed brewery universities like Weinstephan in Germany, and Heriot-Watt and Innis & Gunn anticipate a wealth of benefits to arise as a result.

Innis & Gunn’s £3m ‘Beer Money’ crowdfunding campaign through the Seedrs platform will help fund the new brewery which the brewer plans to build on a two hectare site at Riccarton which is planned to be operational in 2021.  Now that the site has been revealed, the brand has chosen to extend the crowd fund period until 31 January 2020 to give as many people as possible the chance to invest.

The brewery will also be part financed via a £15m loan which is currently being progressed, subject to due diligence.

As well as brewing Innis & Gunn’s core range of Craft Lager-Beer, Original, Session IPA and other unique barrel-aged beers, it will house a high speed canning, bottling and kegging capability, streamlining several outsourced brewing and packaging sites in one location, reducing Innis & Gunn’s carbon footprint.  It will also house a visitor centre and offer tours, a Tap Room will be added at a later date.

Built to meet demand for Innis & Gunn’s award-winning beers, it is anticipated that up to 30 new jobs will be created, with Innis & Gunn’s existing 45 office based team relocating from offices in Edinburgh’s Randolph Crescent.

Heriot-Watt University’s International Centre for Brewing & Distilling students will benefit from the brewery through opportunities gaining hands-on experience across all aspects of brewing operations in a large-scale production brewery.  Innis & Gunn and Heriot Watt University will announce details of the academic collaborations between them including Innis & Gunn’s commitment to learning in due course.

“Building this brewery is a big step for Innis & Gunn in delivering our ambitious growth plan, from which we can capitalise on the existing strong performance of our craft lager and portfolio of IPAs and barrel-aged beers.”

“We are creating an centre for brewing, collaboration and applied learning on the world stage. Innis & Gunn and Heriot-Watt University are both highly respected international brands renowned for their quality and forward thinking. This collaboration brings these two brands together in the most exciting way we can imagine.”

“Working with the International Centre of Brewing and Distilling opens up endless opportunities by combining our creative abilities and the talent pool at the university with our new world class, modern brewery. We hope to be able to research new beers and brewing techniques, develop pioneering carbon and water saving technologies and create new products that respond to changing demands from consumers, as well as facilitating in-work learning for students.”

“Edinburgh was in the past a centre of brewing renown, with over 40 breweries in the capital. We are especially proud to be part of the revitalisation of Edinburgh as a world centre for brewing. Having our brewery here, where we first brewed Innis & Gunn, completes the journey I started back in 2003.  Building it next to a centre of excellence for brewing and distilling talent makes absolute business sense; cementing a long-standing relationship with the University and enabling us to add on-campus practical experience for students.”

“It’s a great location for a purpose-built facility that will be the beating heart of our business.  It will give us huge flexibility for our current and future needs, increasing our agility in the market and simplifying our existing brewing and logistics operations.”

“Heriot-Watt has a long and distinguished history of excellence in research in Brewing and Distilling built on a foundation of collaboration with the Brewing and Distilling industries. The choice of Innis & Gunn to locate their new Brewery on our research park is an affirmation of our role in this vitally important Scottish industry. We look forward to welcoming them on to our research park and to successfully collaborating with them.”

Innis & Gunn’s brewery in Perthshire will continue to brew the award-winning Inveralmond Brewery range of cask and bottles ales and will focus on small scale experimentation and limited edition barrel-aged beers.

In 2018 Innis & Gunn achieved its 15th consecutive year of double-digit volume growth, selling 21M pints of beer in over 30 countries with a portfolio including its flagship beer The Original, Innis & Gunn Lager, Gunnpowder and Session IPAs, and a successful limited-edition range of barrel-aged beers.

The Innis & Gunn Brewery in Perth is the brand’s home for innovation and barrel-ageing, with plans to build first new large-scale brewery in Edinburgh in 150 years to meet exploding domestic and international demand for its leading brand Innis & Gunn Craft Lager.

Winning over fifty awards in the past decade, Innis & Gunn beers are renowned for quality at home and internationally.  Recent wins include Scottish Brewery of the Year and Gold and Silver product medals in the 2019 New York International Beer Competition, and Gold in the 2017 Monde and Scottish Beer Awards.

The International Centre for Brewing and Distilling (ICBD) is a unique teaching and research facility. The centre is based on a partnership between industry and academics, and makes up part of the School of Engineering & Physical Sciences located in the Riccarton campus of Heriot-Watt University, Edinburgh.

The ICBD is the only organisation in the UK to offer both Honours and Masters degrees in Brewing and Distilling. As such, the centre not only supplies the industry with new-blood graduates, but with services, expertise and facilities consistent with the standards required in the local, national, and international markets. A variety of courses are available both on campus and by distance learning.