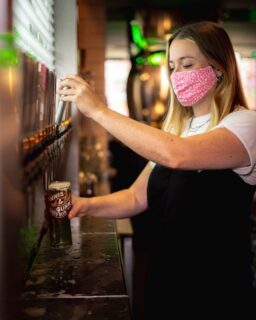 Brewer Innis & Gunn is taking further steps to support their staff, receiving ‘Living Wage Employer’ accreditation from The Living Wage Foundation. Achieving this, means that Innis & Gunn voluntarily commits to paying all staff at a rate higher than the national minimum wage.

As part of Living Wage Week, The Living Wage Foundation announced that the current living wage of £9.50 per hour, will increase to £9.90 per hour. The hourly rates are calculated annually, based on the best available evidence about living standards in the UK, to better reflect the real cost of living.

As now one of just over 120 accredited Living Wage Employers in the Hospitality sector in Scotland, Innis & Gunn will pay all staff at these rates as a minimum, including all staff at their four Brewery Taproom bars in Scotland – Edinburgh, Leith, Glasgow and Dundee.

Dougal Gunn Sharp, Founder, Innis & Gunn said: “Offering our staff the real Living Wage is another way for Innis & Gunn to reward our teams for their hard work and the skills they bring to our business, from brewing to bartending.

“The hospitality sector is often considered low-paying and the challenges facing the industry at present have been well documented, so ensuring we have strong staff retention is even more important. With the introduction of the Living Wage to our business, we can continue to show that hospitality offers a great career path with excellent job prospects and pay that matches.”

Lynn Anderson, Living Wage Scotland Manager said: “We’re delighted to welcome Innis & Gunn as an accredited Living Wage employer. They join a growing movement of over 2400 employers in Scotland who together want to ensure workers are supported as living costs rise.

“Living Wage employers like Innis & Gunn are helping to tackle low pay in the hospitality industry. Committing to paying at least the real Living Wage ensures workers can earn enough to thrive and can contribute to a successful operating model, delivered by a happier, healthier and loyal team. We hope to see even more employers in the hospitality industry following the lead of Innis & Gunn by becoming Living Wage accredited”.

For those looking for a change or to start a career in Hospitality, Innis & Gunn is currently recruiting for a variety of positions at their Brewery Taproom bars. Back of house there are opportunities for chef de partie and sous chefs and there are also front of house and brewtender roles. Visit https://innisandgunn.ats.emea1.fourth.com/ for more.

About Innis & Gunn:
Since its foundation in 2003, Scottish brewer Innis & Gunn has grown to become one of the UK’s most successful craft beer businesses. Using innovative techniques including oak cask maturation, Innis & Gunn brew multi-award-winning beers including the flagship ‘The Original’ and Innis & Gunn Lager Beer, recently awarded at The Great Taste Awards. The brewer’s portfolio also includes a range of IPA’s and a line of bespoke limited-edition brews which demonstrate quality, innovation and craft.