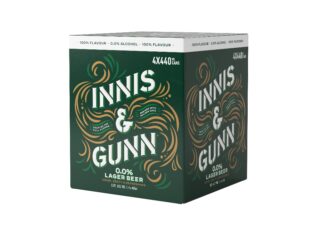 Innis & Gunn 0.0% Lager has been brewed at 0.0% without producing or removing any alcohol from the process. This innovative new method is rarely used and helps create a beer that’s as close as possible to its 4.6% parent. It is yet another point of difference for Innis & Gunn 0.0% Lager, in what is an increasingly popular and growing sector.

The hops in the new Innis & Gunn 0.0% Lager are exactly the same varieties of Styrian Goldings and Super Styrian as in the 4.6% but added at slightly different rates, as the zero percent Lager is lighter bodied: But the unmistakably uplifting citrus zing of the two hops is true to both.

The malts in Innis & Gunn 0.0% Lager vary from the 4.6% recipe by using only pale ale malt as its base, instead of a blend of lager malt and ale malt: The ale malt in the zero percent Lager Beer promotes a reassuring maltiness, which is often hard to achieve in alcohol-free drink products.

The Innis & Gunn 0.0% Lager recipe has also substituted flaked oats for the golden naked oats of the 4.6%, as the flaked oats bring smoothness to the zero percent Lager Beer whilst giving some additional body to the beverage – a characteristic not often needed in standard Lager.

A final element of the recipe was a small amount of roasted barley for adding some golden highlights to the beer. This allows Innis & Gunn 0.0% Lager to mirror the colours of the 4.6% Lager Beer as brewing beer at such a low abv makes the beer extremely pale!  The 0.0% uses a “non-saccharomyces fermentation.”

Dougal Gunn Sharp, Founder and Master Brewer, Innis & Gunn said: “We have been working on brewing a strictly 0.0% version of our award-winning Lager Beer for some time and I am thrilled to finally be able to announce this beer along with news of initial listings with Tesco across Scotland.

“We have once again used pioneering innovation and the skill of our talented brew team to create this premium non-alcoholic Lager, which does not compromise on flavour or refreshment and which is totally Innis & Gunn.

“This is a much anticipated release from Innis & Gunn, and an extension to our hugely successful Lager Beer. It is part of our strategy to grow the brand and to offer consumers more choice on more drinking occasions in different categories.”

There are no plans at present for either bottle or keg formats.

Innis & Gunn 0.0% Lager will be available on-shelf in 106 Tesco stores throughout Scotland from 15th November and in all Innis & Gunn Brewery Taproom bars, as well as from the online shop from 8th October 2021. www.innisandgunn.com

Since its foundation in 2003, Scottish brewer Innis & Gunn has grown to become one of the UK’s most successful craft beer businesses. Using innovative techniques including oak cask maturation, Innis & Gunn brew multi-award-winning beers including the flagship ‘The Original’ and Scotland’s Best Lager, Innis & Gunn Lager Beer. Innis & Gunn is the third biggest craft beer brand in the UK-off-trade and the number one imported craft beer in Canada. The brewer’s portfolio also includes a range of IPA’s and a line of bespoke limited-edition brews which demonstrate quality, innovation and craft.

For more information and to request an interview: