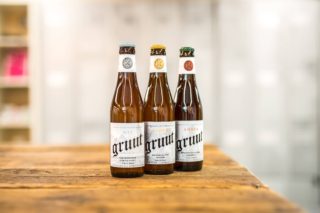 Taking advantage of its tradition and bucking the current trend for hop heavy beers, The Gruut City Brewery in Ghent, Belgium, is disrupting the UK market with the launch of four hop-free Belgian brews.

Gruut revives the medieval method of using herbs to deliver bitterness to beer usually provided by hops, and is working exclusively with James Clay, independent importer and distributor of world renowned craft beers, to supply its export to the UK’s on trade for the first time.

Master Brewer, Annick De Splenter, established Gruut in 2009 after her initiation into fermentation at an early age, and has spent years perfecting the brewing of beers without hops. After a course in biochemistry and various collaborative links with a range of universities, Ghent Gruut Wit, Ghent Gruut Blonde, Ghent Gruut Amber and Ghent Gruut Bruin are now available in the UK, providing traditional yet innovative brews that push the boundaries of the craft beer market. Anticipated to be the most popular style, Gruut Blonde competes with traditional pilsners as a zesty beer delivering bitter, citrus notes, whilst Gruut Bruin offers deep and rich nutty flavours.

Annick commented: “In our region, brewing with gruuts, or herbs or spices, dates back to the Middle Ages, when the river Leie divided Ghent into two parts. On the right bank the brewers used typical beer ingredients like hops, while those on the left bank, which was ruled by the French, added a mixture of herbs to their beers. Landlords collected a tax from brewers based on the amount of herbs used to make their beer. Today, The Gruut City Brewery combines present day brewing techniques with centuries old tradition. I’m really proud of what we’ve achieved and very excited to be launching our beers to the UK for the first time with James Clay.”

Ian Clay, Founder of James Clay, added: “Tradition is a quality we at James Clay hold in high regard, and of course, we always love working with products that provide a twist on that tradition, so we’re very pleased to be working with Gruut to offer it’s hop-free beers in the UK. These flavour-first beers really are something quite exceptional, and I’m sure they’ll find a large fan base on our shores.”

For more information about Gruut or James Clay, please contact Louise Watson-Dowell on louise@ilkagency.com or 1003 242 9174.

The Gruut City Brewery in Ghent was established in April 2009 by Annick De Splenter at Grote Huidevettershoek in Ghent. Annick was initiated at an early age into the wonderful world of fermentation and beer. Her love of beer is clearly in her genes, because family on both her mother’s and her father’s side were involved in brewing. Some of the well-known brand names they worked on include Young Pale Ale from Gistel and Dentergems Wit, Liefmans and Lucifer from Dentergem.

The exceptional properties of four of our Ghent Gruut beers stem from the fact they are brewed without hops. As you would expect, research into alternatives for replacing hops is no easy task. It was only after a course in biochemistry and various collaborative links with a range of universities that Annick’s Ghent City Beer saw the light of day. There are now 5 different varieties: Ghent Gruut White, Ghent Gruut Blonde, Ghent Gruut Amber, Ghent Gruut Brown and Ghent Gruut Inferno.