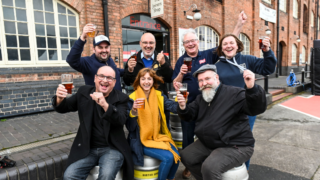 The International Brewing and Cider Awards today announce the medal winners for 2019; certifying 133 beers and ciders as among the best in the world.

The beer medal winners ranged from small craft breweries from all corners of the globe to well-known brands such as Sierra Nevada, Samuel Adams, Camden Town, Deschutes, Fullers and Big Drop.

The competition – attracting entries from 200+ breweries and cider mills from around world – was judged by an international panel of 50 judges.

Over 1000 beers and ciders from 50 countries were submitted for judging, which took place over an intensive three-day period.

An International Brewing & Cider Awards medal is considered among the industry’s most coveted awards.

Established in 1888 – and evolving consistently over time to reflect an ever-changing beer and cider industry – the International Brewing & Cider Awards aim to reward and recognise the innovation, attention to detail and hard work that goes into beer and cider production.

The awards will culminate with the medal presentations at London’s Guildhall, where members of the international brewing and cider-making community will come together to discover and celebrate the 2019 trophy winners.

“It brings me great pleasure to announce the medal winners, and no small measure of pride to be involved in our fantastic industry.

These awards are a bastion of excellence, and we are always sincerely impressed by the talent of the medal winners.

With each round of awards, the standards are pushed ever higher. Competition is fierce, and receiving a medal is an achievement to be truly proud of. My congratulations to all!”

“Being Chairman of Judging has been such a privilege. My thanks go out to my fellow judges, and to all those who are involved in organising these incredible awards, especially our technical installation team.

We pride ourselves on ensuring that the integrity of any product submitted remains in peak condition, and that it is dispensed to our Judges at the brewers’ and cider makers’ recommended temperature.

Judging and sampling the quality of entries has been a wonderful experience, and we have been blown away by the brewing and cider making talent that we have witnessed.”

A full list of all medal winners can be found at: https://www.brewingawards.org/

The International Brewing Awards is the longest established brewing competition in the world, having first been held in 1888. Since then, the competition is focussed upon searching out excellence and rewarding it across all styles of commercially brewed beer. The winning brands are awarded medals and trophies from the world’s most professional tasting panel, comprised exclusively of experienced commercial brewers.

The competition has evolved and developed with the global industry and has accommodated many changes in the market over its 130 year history.

The International Ciders Awards were reintroduced, as an international recognition of excellence in cider production in 2013.

An award is a recognition by fellow professional cider makers that a cider is an outstanding commercial example of its style. The competition was first established in 1901 and since then has evolved to reflect the changing global market for cider.

The superb technical installation including cider in bottle, can, bag in box, cask and keg ensures integrity of product, dispensed to the judges at the cider maker’s recommended temperature.

Stewards are trained to ensure integrity of pour and dispense to the judges and all judges are currently practising cider makers from around the world. With seven categories, leading to a Supreme Cider Champion, linked to the consumer experience, there is a place for every cider, with every cider having a chance of winning – even those new or innovative variations on styles.

The trophy winners announcement will be made on 1st May 2019 at an awards ceremony at Guildhall, City of London.

For more information or photography about the awards, please contact: