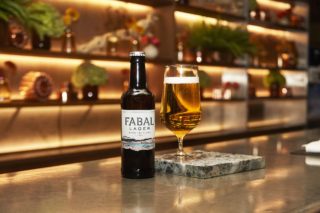 All-English FABAL Lager:  first in UK to use pressed as well as malted barley for a crisp, dry finish

Hiver, the award-winning beer producer, will launch the first beer in a brand-new brand family , FABAL Lager at BrewLDN on Thursday 27 February 2020.  It is a credible, home-grown alternative to international, premium lager brands.

FABAL (4% abv) has a balanced flavour with universal appeal. It is the UK’s first ever lager to use pressed barley, which has been steamed and rolled rather than roasted, to give it its crisp and dry character alongside traditional roasted malted barley for its finely balanced sweetness.

It has been exclusively soft-launched at on-trade with partners such as The Dorchester Hotel and gastropub, The Royal Oak Marylebone.

There is huge potential for off-trade sales in that FABAL is an independent, premium lager with all English ingredients, which will sit in a category dominated by leading, international brands.  In fact, the launch of FABAL  is expected to start the expansion of a ‘Premium and British’ category for the Hiver team.

FABAL is initially available in 330ml bottles and 30 litre kegs with new formats in development.   FABAL will be available via Nectar Imports as the exclusive draught distribution partner from launch who recognise the gap in the on-trade for a premium British lager at 4% ABV.

It has a delicate apple blossom nose, with a grainy malt body, followed by a clean and refreshing dry finish.  In addition, FABAL has an extended maturation period of six weeks for natural carbonation.

In a series of consumer groups and blind taste tests, FABAL stood out as the preferred liquid among a line up of craft, premium and mainstream beers.

With all-English ingredients and packaging, FABAL has a low carbon footprint and is committed to provenance and sustainability.  Its creators expect it to be a popular choice among those consumers who seek to live their values through the products they buy.

Founder and creator of FABAL, Hannah Rhodes said: “The brand has been developed from a passion for balance in flavour and for showcasing UK ingredients to create a truly classic lager style with a delicate, balanced flavour.  In blind taste tests, it more than held its own against other premium and craft lager brands and has received fantastic feedback from on-trade and off-trade contacts alike.  We hope it is a classic and homegrown premium lager that UK consumers can be proud of.”

Owner of the Royal Oak Marylebone, Andy Ward said: “Week on week the consumer base for FABAL has continued to grow organically and over a six week period, it became our best selling beer – selling 33% more than the next best beer and nearly four times as many pints as our leading continental lager.”

The name FABAL is derived from the Latin for ‘the human being as the maker or creator – a craftsperson or artisan’.  FABAL will celebrate these often unheralded makers by supporting their learning and working in partnership with local art schools.

FABAL is an accredited ‘Slow Food’ product meaning it passes this global movement’s criteria for being ‘good, clean and fair’ and it is suitable for vegans.

A great with-food beer, FABAL can be enjoyed as an aperitif with salty bar snacks and cold cuts or alongside rich salad dressings, creamy desserts or a seafood platter and lobster.  And as a vegan friendly beer, it’s also a great match with asparagus; with British asparagus season coming up from late February to June, FABAL will offer the opportunity for fantastic English pairings on menus.

For further media information contact Paula Hunter on 0773 9989915 or paula@prhunter.co.uk


Hiver Beers is a brand owner of all-British, all-natural craft beers brewed using unique blends of urban and rural honeys from London and the UK.

In February 2020, it launched FABAL for on-trade and off-trade purchase.

Recognised for its quality, consistency and depth of flavour, the Hiver range has been regularly covered in the UK media and has received a number of national and international awards.

Hiver embodies a strong ethos of ‘giving back’, investing in the local community, stockists and drinkers not only to create a loyal fanbase but also draw attention to a vibrant British brewing scene.

Hannah Rhodes launched Hiver Beers Ltd in September 2014, having previously worked within the UK beer and beverages industry. Formerly she occupied the role of senior sales and brand manager at Meantime Brewery, where she was responsible for launching their popular London Lager, and was subsequently the sales and marketing manager at Frobishers Juices. Here, she was instrumental in rebranding the range and enabling the challenger brand to break a glass ceiling on sales.

The inspiration for Hiver came to Hannah following an introduction to urban honey at the 2012 Urban Food Fortnight and an introductory course in beekeeping at the London Honey Company.

In 2014 Hannah was named one of Management Today and The Sunday Times ‘Top 35 under 35 to watch’, an impressive accolade which highlights some of UK businesses most promising rising stars. Significantly, she was also one of the founding mentors for Fast Forward 15, a hospitality mentoring programme launched in 2015 to encourage and develop young women within the industry to reach their full potential.

To this day, Hannah continues to build Hiver’s business, overseeing new lines and winning new contracts both nationally and further afield, while maintaining an ethical approach for which the beer is consistently lauded by stockists, drinkers and fellow industry peers alike.