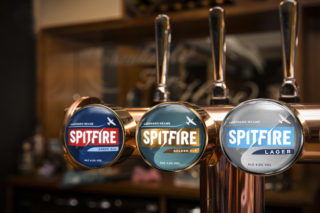 Shepherd Neame is proud to unveil a dynamic new look for one of Britain’s best-loved beers.

Spitfire has been given a premium and stylish new look befitting its status as a Great British classic.

The new design depicts the Spitfire soaring through the heart of the logo, its upward trajectory mirrored in the dramatic curve of the label. In addition to the classic Amber Ale, Spitfire Lager and Spitfire Golden Ale have also been refreshed in the same stylish manner.

Shepherd Neame Head of Marketing Joanna Richardson said: “When we speak to consumers about Spitfire, there’s a sense of pride, an emotional investment in the brand that cuts through generations.

“This new design perfectly captures the dynamism and emotion Spitfire evokes as a timeless British classic.

“At Shepherd Neame we don’t talk about team spirit we talk about the ‘Spitfire spirit’ –steadfast, loyal, gutsy, individual and full of character, just like the beer.”

Spitfire Amber Ale is a truly British beer, but also an international success, sold in more than 40 countries, carrying a Royal Warrant and the same protected status afforded to Champagne.

Shepherd Neame and Spitfire enjoy a long-standing partnership with Kent County Cricket Club, and the T20 team will also be sporting the new logo on their kit from July onwards.

Spitfire was formally launched in May 1990 as part of an RAF Benevolent Fund fundraising campaign. At the time Shepherd Neame pledged £10 from every barrel sold to the fund. By February 2019, more than £27,000 had been raised through sales of Spitfire ale. Since then in excess of £350,000 has been raised for the RAFBF through a combination of Spitfire sales, campaigns and sponsorship events. Spitfire continues to support the RAFBF and is a licensed partner of the RAF.

Spitfire has enjoyed Protected Geographical Indication (PGI) status since 2007, as Kentish Ale, brewed only with water from the artesian well beneath Shepherd Neame’s Faversham Brewery and 100% Kentish hops.

In August 2014 Spitfire was awarded a Royal Warrant from HRH the Prince of Wales.

An estimated 250 million pints of Spitfire Amber Ale have been sold to date.