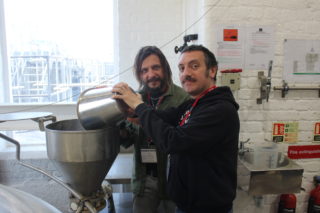 Bernardo Perfetti and Gabriele Di Marcantonio, from Mezzopasso, travelled to the Faversham Brewery to work alongside a team from Shepherd Neame. The end result,

Bella Birra (4.4% ABV), combines sweet malt with red berry and citrus flavor notes courtesy of English and US hops, with dried rosemary added to the copper late in the boil.

It is the latest beer to appear as part of Cask Club, the contemporary cask ale initiative launched by Shepherd Neame earlier this year and featuring a different beer each month. Bella Birra will be widely available throughout June.

Shepherd Neame head brewer Mike Unsworth said: “Bernardo and Gabriele visited us back in April to talk about the beer we wanted to brew and some exciting ideas emerged.

“After putting our heads together we came up with a recipe for a red rye beer with some delicate Italian herb flavours and a citrus finish.”

Mezzopasso started life in 1998 and are based in Popoli, close to Pescara in the region of Abruzzo. With much of their output inspired by British beer styles, they were delighted to work at Britain’s oldest brewer.

Bernardo Perfetti said: “Shepherd Neame is a very important brewery and we know it well. We tasted some other collaborations that they worked on with other brewers and were really impressed, so we were very excited to have this opportunity.

“It was a great experience to work in such an environment, surrounded by so much history.”

For further information on where to find Cask Club beers and how to join the club contact www.sncaskclub.co.uk.

Bella Birra Italian Red Rye Beer is hopped with British Bramling Cross and Target alongside Amarillo and Lemondrop from the US. Dried rosemary is added to the copper late in the boil.