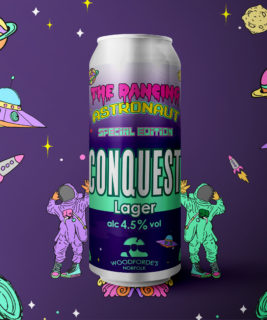 Although an iconic local brand, Woodforde’s has traditionally been better known for its multi-award-winning ales – boasting two CAMRA Supreme Champion Beer of Britain awards. The brewery has recently embarked on a drive to appeal to a younger demographic, introducing a range of three craft-style keg beers – Norada, Conquest and West Coast Wherry, as well as brewing a bespoke British Lager for Marks & Spencer. The partnership with AfterDark, under their ‘Dancing Astronaut’ brand, provides a perfect opportunity for Woodforde’s to broaden its reach further, with 4,000 revellers expected to bring in the New Year at the Norfolk Showground Arena.

Conquest lager, the drink of choice for the event, has been given a distinct ‘Dancing Astronaut’ label redesign by Woodforde’s in-house design team, and bespoke 440ml cans to reflect the collaboration.

Commercial and Marketing Director, James Armitage, had this to say about the partnership: “We’re really thrilled to be working with AfterDark. Our beers are more popular than ever with a younger demographic and we’re always looking to reach new audiences, whether it’s through our partnership with Norwich City FC or working with AfterDark, and the bespoke can design looks out of this world!”

It’s not just the 440ml cans that have been given the bespoke treatment; Dancing Astronaut even paid a visit to the brewery to ‘create’ the special beer, shown in a film for the event.

Michael Femi-Ola, AfterDark Director, added: “We are really excited to work with a local brewery to replace our current, well-known beer provider at our Warehouse events at the Norfolk Showground. We value supporting local suppliers and businesses, especially a fast-growing brand like Woodforde’s that has a very similar ethos to us.”

The New Year’s Eve Warehouse Party will be headlined by UK Garage pioneer, DJ EZ, and the event has already received a huge amount of interest. With last year’s event selling out, guests are being urged to secure their tickets in advance.