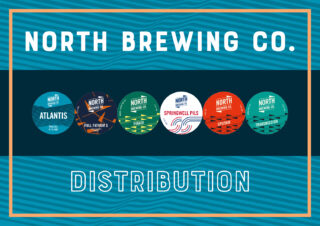 JAMES CLAY AND SONS ANNOUNCE A NEW DISTRIBUTION PARTNERSHIP WITH LONG TERM FRIENDS AT NORTH. STARTING FROM THE WEEK BEGINNING 2ND OF AUGUST WE’LL BE TAKING CARE OF ALL FULFILMENT AND DISTRIBUTION OF NORTH BREWING CO. BEERS OUTSIDE OF LEEDS, HELPING THEM TO FOCUS ON CONTINUING THEIR ALREADY EXCEPTIONAL GROWTH. THIS PARTNERSHIP WILL ALLOW US TO SPREAD THEIR BEERS FAR AND WIDE THROUGHOUT THE ENTIRETY OF OUR NATIONWIDE NETWORK. OUR SISTER COMPANY RARTER BOND WILL ALSO BE PROVIDING THE BREWERY WITH COST EFFECTIVE STORAGE SPACE TO FACILITATE THEIR DEVELOPMENT.

For current directly serviced customers outside of Leeds, we will honour existing pricing agreements, and we’ll be replicating their range to ensure consistency.

We’ll be adding Piñata, Sputnik, and Transmission to our core list in keg and can, and will be working with all of their special and seasonal releases too. On top of this we’ll be able to offer their new Atlantis Pale as a house beer. Atlantis is a 4.1% soft and crushable pale ale. Made with American Mosaic and Citra hops and Australian Galaxy hops, singing with vibrant pithy grapefruit and crushed pine needle aroma and bursts with sweet blueberry and fleshy pineapple flavour, all rounded off with a satisfying bitter finish that keeps you coming back for more. It will be permanently available in Keg, Cask, and Can, and we reckon we’re going to drink plenty of it.

Our relationship with North goes back a quarter of a century (ok 24 years, but that sounded cool to say). John Gyngell and Christian Townsley opened North Bar in July 1997 and in their own words Leeds at this time was ‘a bar desert’, independent operators were few and far between, and the offerings uniform and commercial. They themselves opened with a deeply commercial lineup of beers that certainly wouldn’t get a look in on today’s menu.

Seeking out exceptional beers wasn’t as easy in the late nineties, there was no google to stick ‘Ayinger UK Wholesale’ into, realistically you’d have to catch something at a roadshow or in a trade publication. By chance, one day in late 1997 Andrew Asquith, then an Account Manager now our Commercial Manager (now with 25 years service), was passing through New Briggate and decided to drop in on a cold call with a price list. John & Christian were delighted to see such a wide range available, and supplied from a local company too. New Account forms were filled, and the first order placed for a range of classic bottles. Not long after this Christian remembers approaching the 1998 World Cup and trying to build a range to match the teams in the tournament as a pivotal moment in opening their eyes to the potential in World Beer. Something was beginning to take hold, and it would soon grow arms and legs.

We eventually managed to develop an opportunity for West Yorkshire cult classic Lindeboom to nab a spot on the bar. From here we soon added Liefmans and others, before eventually supplying the whole bar. ‘Gaining these listings with North Bar was a massive moment for our company’ remembers Andrew. ‘At the time we didn’t really sell much draught at all. But their open mindedness and passion for making a true point of difference gave us the confidence to push on and develop a wider range’. North Bar quickly became a flagship for the James Clay and Sons range. Any time we had international visitors we’d take them there to show what the UK bar scene was capable of. They also very quickly became a proving ground for any new brands of ours, being the first in the UK to pour Erdinger, and were so proud of it that they kept the empty keg on a shelf behind the bar for years (this must have been before we started charging keg deposits). Ian Clay remembers that John and Christian were ‘always very innovative and embraced change, and we often had accounts coming to us with enquiries after seeing them do something first’.

North Bar has come a long way from those early days in 1997 and its position as a legendary UK beer bar is firmly cemented. Anybody with an interest in the UK beer scene passing through Leeds will have enjoyed their fair share of tequila and verdita, or dug into the bar’s revered cellar list.

Now John and Christian have developed North into a group of 6 bars, plus an additional two brewery taprooms. There wasn’t necessarily a grand plan from day one, and Christian says ‘We’ve made it up as we went along. Our growth has been very organic, reacting to opportunities and our creative desires. But we’re much more focussed now. The brewery has been on the to-do list since 2004, it may have taken us 11 years but we believe it was worth the wait.’

This new distribution partnership gives us the opportunity to take our decades long relationship forward to the next level helping both of us to achieve new goals. ‘We want North Brewing Co. to become recognised as the number one brewery in the UK for quality, innovation and consistency. We believe that in partnering with James Clay we can fulfil distribution to parts of the UK previously not possible, and support our customers by focussing on what we do best, brew great beer and deliver great service and support, while JC can fulfil the excellent and professional distribution that is their forte.’

We’re extremely excited about this direction, and a new style of relationship with a brewery. James Clay and Sons Business Development Manager Chris Mair feels that ‘our combined business and personal relationships coupled with the JCS infrastructure, including Rarter Bond’s storage capabilities, made this a relatively simple project to agree on. The trajectory North Brewing Co. are on is simply staggering, and it was quickly clear that our goals were their goals and vice versa. We aim to establish ourselves as a national distribution partner for the best UK breweries, by providing sales and logistics for the top tier of beer makers to allow them to concentrate on the business of brewing without being encumbered with the onerous tasks of delivering and chasing money. Ours is a very different relationship of course, the longevity and friendship are unique to North with JCS, but I’d like to think of this as a watermark for what we do at JCS; we’re not just distributors of UK beer, we’re partners of UK breweries, growing the category together to the benefit of everyone.’