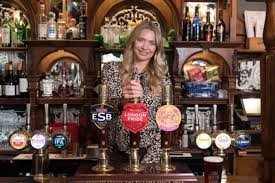 Publican Jodie Kidd today delivered a petition to No. 10 Downing Street calling for a cut to devastatingly high beer duty, to help support local pubs. It is forecasted that one in 10 pubs (12%) could close within five years if the Chancellor does not ease some of the pressures including a reduction in beer duty in the Autumn Budget.

Kidd was joined by fellow publicans to deliver the “Long Live the Local” petition – a nationwide campaign backed by Britain’s Beer Alliance – which has gathered over 105,000 signatures and galvanized more than 46,000 people to write to their MP since launching in July this year.

The delivery comes as polling conducted by YouGov ahead of the Autumn Budget reveals nearly three-quarters (72%) of people believe pubs are an important part of local communities and more than one in three (36%) say pubs are important to their social life. Two-thirds (68%) add that pub closures are bad for local communities and over half (55%) also say pub are important to securing the future of the struggling local high street.

However, with nearly the same number (53%) saying that going to the pub is less affordable than it was five years ago and over a third (36%) stating that they now visit the pub less often today, it seems that no matter how important people believe the pub to be, many are being priced out of visiting their `local`.

Asked what should be done, seven in 10 (71%) said they would like to see the Chancellor cut or freeze in beer duty in the Budget on 29 October.

Three pubs currently close their doors for good every day in the UK due to increasing financial pressures from a range of taxes. With seven in every 10 alcoholic drinks sold in a pub being beer, a rpi linked increase (3.4%) in beer duty planned in the Budget this month, followed by further RPI linked increases, will increase the pressure on pubs further and could lead to over 12,500 job losses within four years.

Jodie Kidd, publican of The Half Moon, Kirdford, says: “Local pubs like my own bring people together and are at the heart of communities. However, mounting financial pressures mean that for many it is already a struggle just to keep their doors open.

“I am at Downing Street today to deliver the Long Live the Local petition because, along with 105,000 other people, I believe the Chancellor must act now to protect our local pubs. An increase in beer duty on 29 October will continue to cripple our pubs with communities bearing the cost.”

The last time Beer Duty increased year on year was between 2008 and 2013 when the Government put a Beer Duty escalator policy in place. Over those five years there was a 24% decline in beer sales in pubs, 5,000 pubs closed and 58,000 people lost their jobs.

David Cunningham, Programme Director for “Long Live the Local”, adds: “Our pubs and brewers not only support nearly 900,000 jobs, account for £11.1 billion in wages, contribute £22.9 billion in GVA to the economy and pay £13 billion in taxes, but they are also vital for our high streets and highly valued by communities.

“Despite this, beer duty in the UK is already taxed at three times the EU average and 12 times higher than in Germany and Spain. If the Chancellor raises beer duty in line with RPI inflation as planned, the result could be catastrophic. Based on current closure rates, we estimate that within five years more than one in 10 pubs in the UK could close for good, costing thousands of jobs.

“That’s why more than 105,000 people have raised their collective voice and signed the Long Live the Local petition and more than 45,000 people have written to their MP calling for a cut in beer duty. A recent Oxford Economics report estimates that a 2% cut in beer duty, which is what we are asking for,  would not only help protect over 12,5000 jobs, it will also create a further 8,500 new jobs over the next four years”.