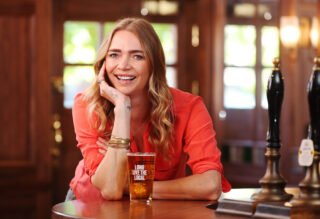 Publican and model Jodie Kidd, today launches a new campaign for Long Live The Local to champion the important social and economic role that pubs play at the heart of communities in the UK. The campaign goes live just as pubs hope and expect confirmation from Government that they will be able to reopen fully and restriction free on July 19.

The campaign will celebrate that the pubs we love are back but also highlight that we cannot them for granted. It will call on Government to invest in Britain’s pubs and breweries through the reform of VAT, Beer Duty and Business Rates. The new campaign

As pubs return to normal for the first time in nearly 18 months, new research from Long Live The Local reveals that almost 9 in 10 people (86.2%) have formed a special relationship in the pub – whether falling in love, having a first date, making a new friend or meeting their business partner – the pub has played an integral role. Over half (55.6%) of Brits think the pub is a great place to spend time with friends, while 41% enjoy quality family time at the pub. It’s a place where everyone can meet with over half the nation (53.2%) saying the pub provides a sociable and friendly atmosphere.

The pub has long been known as the place to find that special connection; where people have fallen in love, got married, met their best friend, found a mentor or reconnected with long-lost friends over a beer.

To celebrate the real stories of those people, Long Live The Local has renamed the Rose & Crown in Clapham Common to the Rose & Rory in honour of the couple who met there two years ago. Rose Maclachlan and Rory Chisolm, both 28, had been working for the same company for two months but only met for the first time in the Rose & Crown on a work social. The pair got talking after Rory accidentally spilled a pint of beer on Rose and have been together ever since!

Jodie Kidd shared a pint with the couple after revealing the sign in tribute to their love story. The Long Live The Local research reveals that Rose and Rory aren’t alone with a fifth (19.7%) of Britons first meeting a romantic partner in the pub, while almost a quarter (23.3%) have had a first date in a pub. Jodie is no stranger to a pub love story herself, favouring Tom Kerridge’s Hand & Flowers for special date nights with her partner Joe.

The pub has a role that reaches beyond romance to bring together strangers who become the best of friends, with over a quarter (26.7%) of respondents admitting they have made a friend in the pub. The pub is also a place to form business ideas over a pint with a third (33%) viewing the pub as a good place to spend time with colleagues. As well as social benefits, the pub sector offers vital economic support for local communities with almost half (46%) having worked in a pub at one point in their lives.

The great British pub is so intrinsically linked to the nation’s culture that nearly a third (29.5%) say the closure of their local pub would negatively impact them. 8,200 pubs closed across the UK between 2010-2019[1]. Last year due to Covid, this accelerated with 2,360 pubs[2] closing their doors for good. Pubs and breweries are one of the most heavily taxed industries in the UK. For every £3 spent in the pub £1 goes to the taxman. Long Live the Local is now calling on Government to invest in pubs and breweries so that they can grow and deliver even more vital social and economic benefits to their local communities.

Jodie Kidd, says “Pubs up and down the country are the heart of communities and play a central role in our lives. We all know someone who has celebrated a special moment at a pub, whether it is a wedding reception with family or a  catch up with an old friend. No matter how big or small the occasion, Brits rely on pubs to provide a warm, comforting and welcoming space to socialise. We can’t take pubs for granted and that’s why I’m backing  Long Live The Local to help our pubs and breweries thrive.”

Kevin Georgel, Chief Executive St Austell added “The last year has been extremely tough for everyone and it is so good to finally see people getting back together and enjoying the company of friends, family and neighbours. Pubs across the UK are, as always, ready to play their role in providing a warm welcome with great food, drink and hospitality enabling us to meet up and enjoy all those great moments we have missed so much. It is really positive that Jodie & `Long Live The Local` are back too, with a new fresh campaign celebrating the return of our social lives and reminding us of that very special feeling when you walk into a great British pub. This is just what we all need right now, so St Austell are a strong and committed supporter of this new campaign”

The new campaign launches with an evocative film capturing that special feeling when you walk into a pub. It reflects the wonderful diversity of pubs across the UK and the beautiful moments taking place inside.

Research was conducted by Censuswide in June 2021 to 2000 respondents.

About Long Live The Local

Long Live The Local launched in July 2018 to celebrate pubs and brewing in the UK. It also raised awareness of the high number of pub closures across the UK and that the UK has one of the highest Beer Duty rates in the world.

In two and a half years the campaign secured over 500,000 signatures in support of a Beer Duty cut, and 285,000 emails have been sent to MPs. This helped secure three consecutive freezes in Beer Duty.

Due to COVID-19 pubs and breweries have experienced a year like no other and now face a long road to recovery. They need investment from Government more than ever.

The campaign has re-launched to celebrate the return of pubs and breweries and their vital social, cultural and economic role in the UK and to ask for the reform of the unfair tax burden – specifically lower VAT and Business Rates for pubs and lower Beer Duty. This will help pubs and brewers bounce back from the COVID-19 crisis and return to growth in coming years. In turn, this growth will create more connected and vibrant communities, local investment & vital employment and ensures our rich pub and brewing heritage continues for future generations to enjoy

Long Live The Local is backed by a wide alliance of pubs, brewers and industry bodies.

Name of Pub: The Chequered Skipper

Story: In 1985, Mark Swingler raced home after an over-long business trip, quickly ate some food, picked up his instrument and went out to play in a gig at his local without changing. During the tune session his wife-to-be asked a mutual friend “Who is the bloke wearing a suit & tie?”.

Story: Dan and his fiance met in the pub, now live in the pub with their children, run the pub and are getting married at the pub in July.

Name of Pub: The Western Approaches (Wayne Rooney’s family’s regular pub and where Wayne used to play football out front)

Story: Melissa, the licensee, grew up living next door, had her first job as the glass collector there, celebrated her 18th birthday party at the pub and is now the licensee living there with her partner and two daughters.

Name of Pub: The White Rabbit

Story: Beer writers Emma Inch (former beer writer of the year) and Jane Peyton first met in a pub the day after Jane moved to Brighton from London. They’ve been friends ever since.

Story: Laura Keenan met her favourite poet (Hugh McMillan) in the Tam O Shanter. Laura would take her crossword into the Tam and get help with the tough clues. One day she was stuck on 3 down and her friend Deano said “Here’s Shug, he’ll know” and in came Hugh McMillan, They’ve been friends ever since.

Story: Jodie Kennedy met her girlfriend Kate in a pub in May 2019. The bartender went to serve Jodie first who excused herself so Kate could order first instead – then Kate offered to buy Jodie a pint back. The rest is history.

Name of Pub: The Great Northern

Story: Brian and Margaret have been together 56 years and met in the music room of the Great Northern, Keighley on Saturday 22 May 1965. Brian called in after a rugby match at Halifax to see the victory over St Helen’s, whilst Margaret was in the music room with her friend, watching a jazz band. It was the first time she’d been in a pub. The Northern was also Brian’s dad’s local. He would be on his regular bar stool between 4pm and 6pm every day.

Story: Paul Crowley met his best friend in a pub called The Highfield in Southampton, 21 years ago after both their mums were diagnosed with similar terminal illnesses at the same time.  From a shared pain, they grew a long-lasting friendship.

Story: Mark & Fiona Curran first met working behind the bar at The Red Lion in Oakhanger in 1987. The pub was run by Fiona’s mother and stepfather Angela and Alan Norris at the time. They had their wedding reception at the pub on Boxing Day 1988 and are still going strong 34 years later. Mark and Fiona now run The Alfred Free House in Upper Hale, Farnham with the help of their four sons.

Name of Pub: The Tower Hotel

Story: Glen Ellis met his wife 16 years ago, whilst working at his mum and dad’s pub. He said it was love at first sight! The pub was The Tower Hotel in Talgarth where he had only been working for 6 weeks or so! Glen and his wife had their first kiss in the function room.

Name of Pub: The Barleycorn Inn

Story: An Australian lady on holiday stopped at the Barleycorn for lunch on the way to Stonehenge and decided to stay for a night. That evening one of the locals bumped into her whilst walking in. They have now been together since 2017 and plan to marry when Australia comes out of lockdown.

To speak to David Cunningham, Campaign Director Long Live The Local or for more, please contact One Green Bean – BBA@onegreenbean.com