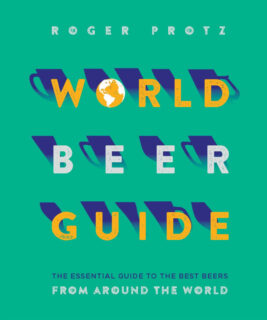 Renowned author and beer expert Roger Protz takes readers on a journey around the world’s best beers in his latest publication with CAMRA Books, the World Beer Guide.

Roger Protz is a campaigner, broadcaster, and author of dozens of books about beer and brewing. He is one of the most prolific writers in his field and has contributed to magazines, newspaper, radio and television and has written over 20 books on beer, which have won him countless awards for his writing, including the first ever lifetime achievement award from the British Guild of Beer Writers (BGBW). He regularly appears in the media and has edited 24 editions of CAMRA’s market-leading Good Beer Guide.

In his latest publication, he has poured decades of first-class beer knowledge onto the pages. The ultimate guide to beer around the world, the World Beer Guide is a book about beer – produced in every country on earth and enjoyed by millions of people. It is a guide written for those who enjoy beer and want to know more.

Beer as a drink has changed out of all recognition in the 21st century. The World Beer Guide will incorporate decades of Roger’s beer experience alongside new trends and modern processes. Each region across the globe will be given detailed analysis and information, and the book will also explore how smaller breweries are competing with large corporations.

The main focus of the guide is the world-wide phenomenon of IPA or India Pale Ale. Roger Protz says: “IPA was first brewed in England early in the 19th century to refresh the British in India. Several decades before the arrival of golden lager, it was the world’s first pale beer and it went on from India to refresh Australians, New Zealanders and North Americans. But massive tax increases on beer during World War One meant IPA became a pale shadow of the original beer and it disappeared from view. But from the 1990s, brewers in America and Britain have rediscovered IPA and there are now thousands of versions available. It has spread its wings and there are interpretations of IPA in such unlikely countries as Belgium, France, Italy, Scandinavia and even Hong Kong.

“This book is a result of decades of experience in the beer industry, inspired by my travels round the world trying the different types and interpretations of beer available. The World Beer Guide is divided into country-by-country sections, allowing readers to join me in dedicatedly exploring different brews from different parts of the planet. These chapters will give more detail of the changes in the beer world, but the introduction will lead readers into the world of beer revolution by describing the enormous power and stretch of global brewers, with the counter culture of the world-wide craft movement.

“We will be charting different beer scenes, key players and styles available across the globe. I can’t wait for you to join me on the journey.”

A taste of Roger’s book is available on CAMRA’s Learn & Discover platform, and is free for all to access: https://camra.org.uk/learn-discover/the-basics/intro-to-the-world-of-beer/

The World Beer Guide will be published on 20 October 2021, and is now available for pre-order, by visiting the CAMRA shop at: https://shop1.camra.org.uk/product/the-world-beer-guide-by-roger-protz/

Press PDFs and copies are available for reviewing, or for serialising. Roger will also be joining CAMRA Chief Executive Tom Stainer and several other CAMRA Books authors at a panel event in London on 12 November 2021 – contact press@camra.org.uk for more information or to register interest in attending.