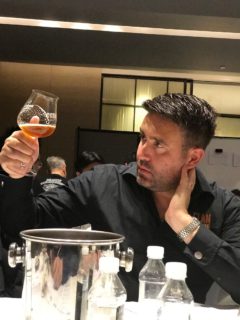 Scotland’s leading exporter of craft beer and spirits has embarked on an ambitious two-week trade visit to China as it seeks to build on a series of export deals and further enhance the reputation of Scotland’s craft brewing and distilling sector in Asia.

The trip by Glasgow-based export consolidator JW Filshill International will take in the Chinese cities of Hong Kong, Shenzhen, Beijing and Shanghai, where Scottish products will be showcased at a series of major food and drink events, such as the Food and Hotel China trade fair. Directors Christopher Miller and Simon Hannah said they have a busy schedule of key meetings arranged over the two-week visit with existing customers and potential new importers.

While in Beijing Mr Miller has again been invited to join the judging panel of the Chinese Craft Beer Awards (CCBA), a prestigious position he took part in last year. The CCBA was itself inspired by the Scottish Beer Awards, of which Mr Miller is a founding stakeholder and judge.

JW Filshill International, a subsidiary of JW Filshill, has spent the past four and a half years showcasing Scottish craft beer and spirits at trade shows internationally as well as establishing trading links with key importers and buyers.

Mr Miller also launched the Clan Brewing Company in 2014 with Scott Williams, who was crowned Master Brewer of the year at the Scottish Beer Awards in September. The Clan Brewing Co matures craft beers in regional single malt barrels and exports to Japan, China, Hong Kong, South Korea and Taiwan.

Mr Miller said: “Our networks with Scottish producers and our ability to consolidate them for export means we are perfectly positioned to support their ambitions to export to China and the Far East, where demand is really starting to take off.

“Trips like this are a big investment for us, but it means we can give these Scottish products a brilliant show at key events. We know there is massive potential for Scottish craft products, including food, across China.”

Mr Miller revealed that JW Filshill International had recently enjoyed a significant breakthrough with its import partner in Shanghai. “We’ve not long sent one consolidated order of craft spirits, and a second is already on its way. We’re extremely excited to now being able to export there, thanks to the partnership with our importer Sprits Drinks International. Shanghai was a real breakthrough for us.”

He said the first export to Shanghai was worth about £20,000, adding that both the volume and value of future orders were expected to increase as market awareness and demand grew.

“This is why these trips are so important, so we can cement routes to market, and meet consumers and help them understand the products we’re shipping, so they too can share our passion for Scottish craft beer and spirits.”

The latest trip follows previous trips to USA, Japan, China, and the Middle East, which resulted in tens of thousands of pounds’ worth of export deals, including a £100,000 export deal of spirits from 20 Scottish craft distillers to Japan.

Earlier this year JW Filshill International said it had generated revenues of about £2 million over the past three to four years, and that last year alone it had exported more than one million bottles of craft beer. “That’s from a standing start,” said Mr Miller, adding that he was “hugely optimistic about the potential for continued growth”.

Praising the culture of collaboration in Scotland, Mr Miller added: “We’re very fortunate in that we can rely on the world-class quality of Scotland’s craft brewers and distillers, as well as the support of agencies such as Scottish Development International and Scotland Food Drink.”

JW Filshill International is the international subsidiary of JW Filshill Ltd, a fifth-generation family business established in 1875, which distributes ambient grocery, beers, wines and spirits in the UK.

The business model is collaborative and was established in 2014 to support and enable the smaller producers of craft beer and spirits a route to international markets. As a trading company it sources, consolidates and ships to market, enabling importers a preferred single point of contact and administration.