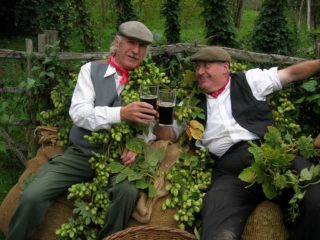 Guardian of Kent’s Farming heritage and home to both hop gardens, growing traditional Goldings and Fuggles hops, and an apple orchard with up to 60 varieties of apple, Kent Life Heritage Farm Park in Maidstone celebrates these typically Kentish crops with two annual harvest festivals.

Kent Life’s Hops n Harvest Beer festival is a family celebration with the farm’s magnificent Oast house at its heart. Festival-goers can experience the last traditional, working coal-fired Oast in Britain in action, where the hops are still dried and cooled by hand today for the festival.

They can also get involved in the hop harvest, fill the bushels, breathe in the heady hop aroma and peek inside the tin Hoppers’ Huts. The huts recreate a typical standard of living for the hoppers, whole families of Londoners, who escaped the London pollution every year and migrated to the Garden of England in late August / early September for several weeks.

After a spot of hop harvesting, festival-goers can taste the fruits of the hop and raise a glass of Kent’s finest craft beers, brewed by a vast array of Kent brewers including: Brew Buddies, Swanley Village; Gadds’ The Ramsgate Brewery; Goody Ales, Herne; Hopdaemon, Sittingbourne; Northdown Brewery, Margate: and Wantsum Brewery, St Nicholas-at-Wade, as well as many more.

There will be live music from an array of local Kentish bands and solo performers featuring on both the Main Stage and the Acoustic stage. Meanwhile, special guest and family favourite Basil Brush will be making a ‘Boom, Boom’ in the Big Top and a silent disco in the Vintage Village Hall will entertain younger members of the family.

The Apple & Cider Fayre celebrates the humble Kentish Apple in all its forms, its versatility and the county’s dominance as an apple grower. Up to 35 varieties – some dating back to the 1500s – are hand-picked just days before the festival from the Kent Life orchard, affectionately known as ‘the sheep orchard’, as it is where the farm’s sheep are let graze. They are available to try and buy throughout the weekend.

A complimentary apple recipe sheet featuring some old-fashioned favourites will inspire comforting pudding creations from the weekend’s apple stash. Visitors are invited to watch traditional apple pressing where apples are cut, crushed and pulped and then squeezed in the farm’s giant Victorian press, resulting in the most delicious, fresh juice.

For cider lovers, the cider tent will host a range of Kentish ciders from local, vibrant craft cider makers such as: Biddenden; Dudda’s Tun, Faversham; Kent Cider, Canterbury; and Turner’s, Marden. Cider cocktails will also be on the menu to sip and savour, while enjoying live music from local bands. Younger visitors will be able to try their hand at a variety of apple-based crafts.

Hop gardens have flourished in Kent since the 1500s as a result of the rich fertile soil, sheltered sunny sites and woodland, which has provided hop poles and fuel. Kent Life’s hop garden is the perfect example of a typical Kentish hop garden with a complicated system of poles and wires, up which the hop bines are ‘twiddled’ to allow them to grow to their full height and still be pulled down at harvest time.

The Hopping season traditionally runs from March when stringing is done ready for the hops to grow through to September when the mature hops are harvested. In September, the fully-grown cones are picked and dried by spreading them on a specially constructed floor above the kiln in the Kent Life Oast house. After they have been spread out on the floor of the cooling room, they are packed into sacks or ‘pockets’ as they are traditionally called.

The abundance of the apple in its Garden of England heartland is such that more than two-thirds of the nation’s apple crop is grown here! Apples and Kent are synonymous – just ask one of Kent’s growing tribe of craft cider and juice producers, part of the craft cider revival.

It is believed that when England’s first large fruit collection was established in Teynham in 1533 by King Henry VIII’s fruiterer Richard Harris, many rich landowners followed suit and this gave birth to the ‘Garden of England’. Ever since, Kent has been the dominant producer of English apple varieties owing a great debt to the Kentish terroir.

A family ticket (2+2) is priced at £37.00 for the Hops n Harvest Beer Festival and £32.95 for the Apple & Cider Fayre. For more information and to book discounted tickets online visit: www.kentlife.org.uk.

Open throughout the year, Kent Life tells the Kent farming story and provides a fun family day out discovering more than 200 farmyard animals, indoor and outdoor play areas, and Kentish gardens and orchards. Visitors can step back in time to experience Kent’s farming heritage in the Vintage Village, which is made up of reconstructions of original rural Kent buildings that have been re-built brick by brick.

The attraction also hosts a series of seasonal special events throughout the year, catering for the whole family. Schools can take advantage of a varied schools’ programme of educational activities and interactive learning linked to the national curriculum. Bespoke experiential event packages, catering for weddings, social functions and children’s birthday parties, are also available.