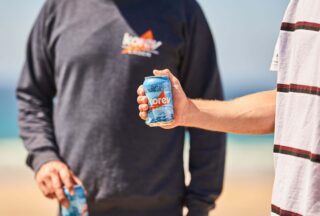 St Austell Brewery’s flagship lager, korev, has been named best ‘International Small Pack Lager’ in the world, at the International Brewing Awards 2021. As well as taking home a trophy, the brewery also took home three gold medals and one silver.

Established in 1888, the International Brewing Awards are often dubbed ‘ the Oscars of the brewing industry’. An award is a recognition by fellow professional brewers that a beer is an outstanding commercial example of its style. Brewers and cider-makers from 24 countries received accolades – 126 medals and 12 trophies in total. There were entries from around the globe, including Australia, China, and the USA.

Andrew Turner, Managing Director of St Austell Brewery’s Beer & Brands said: “We’re so proud to be representing Cornwall on the world stage. It’s very special to have been awarded a gold medal for korev. To go on and be named best in class, in the Small Pack Lager category, is a huge honour.

“The five medals we’ve been awarded are a culmination of many years of hard work and reflect the dedication and talent of our brewing teams in Cornwall and Bath.”

Ruth Evans MBE, Director of the International Brewing & Cider Awards, said: “It’s been an honour to recognise and celebrate the extraordinary beers and ciders that both brewers and cider-makers have worked so hard to produce during what has been such a difficult 18 months for the industry.

“We’d like to congratulate St Austell Brewery on their achievements at this year’s Awards and we’re thrilled to be able to provide them with the recognition they so truly deserve.”