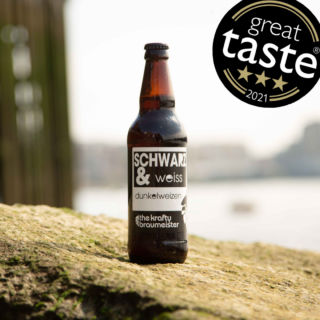 The Krafty Braumeister is delighted to announce that Schwarz & Weiss has won 3-stars: Exquisite at the Great Taste Awards 2021. Only 2% of entries are awarded 3-stars and Schwarz & Weiss was the only beer to achieve this, so it is a huge accolade for the Suffolk-based craft brewery. This year, as few as 218 products were awarded 3-stars from a total of over 14,000 entries.

The Krafty Braumeister handcraft beers in small batches using traditional German brewing techniques. Krafty follows Reinheitsgebot, the German purity law of brewing, meaning that the only ingredients they use are malted grains, hops, yeast and water. All of Krafty’s beers are vegan friendly and free from added sugars and supplements.

Schwarz & Weiss is a traditional Bavarian Dunkelweizen (dark wheat beer). First, you smell the flavours of roasted and oak-smoked barley malts. Then you savour the moderate spicy, fruity, malty, refreshing wheat-based ale. This premium beer reflects the best yeast and wheat character of a Hefeweizen with the malty richness of a Munich Dunkel. The hop bitterness is low.

About Schwarz & Weiss the Great Taste judges commented, “A beautifully complex nose, with cherries and smokiness, coffee and light florals. Perfectly balanced, with a delicious texture. The flavour keeps evolving on the palate bringing forward raisins and cinnamon. The finish is light and very pleasant. We love the mousse and slightly cloudy appearance, and the nose is enthralling with its medley of smoke, banana, caramel, bread notes. Everything on the nose comes through on the palate and those flavours ebb away nicely to leave an excellent finish. An apt colour, good head and bright effervescence convey notes of sauerkraut and toffee on the nose, toffeed banana on the palate, and a bright, lifted lactic acidity on the finish. Entirely uncloying, despite its rounded sweetness and richness – quite brilliant!”

Krafty’s founder, Uli Schiefelbein, says, “Starting a new business and making it profitable is like running a marathon. This fantastic reward gives us the boost we need after a difficult year. We are proud to be producing a quality beer using the finest Suffolk malts. I hope more people will get to taste the delights of our German inspired beers. A big Thank You to our whole team, all the hard work paid off! 3-stars from the Great Taste Awards makes me really proud! Amazing!”

There are four main steps that The Krafty Braumeister does differently to most other breweries. Krafty freshly grind the malt grains on brewing day to ensure that the grains’ full flavour ends up in the beer and doesn’t evaporate through long storage. Krafty then use step-infusion to prolong the brewing process and make sure that all the sugars within the grains get into the beer. During mashing, temperatures are increased in stages, ranging from approximately 40°C to 78°C. The sugars found in the beers are solely produced from the grains. They do not add chemicals to speed up the fermentation process, nor do they add finings to clear up the beer’s appearance. Krafty’s beers are also not filtered to ensure that all the natural full flavours and aromas are maintained. Before decanting into bottles and kegs, Krafty adds fresh yeast and unfermented wort into the fermenting vessel, a process called ‘Kraeusening’. This continues the carbonation process and ensures that carbon dioxide is produced naturally in the bottle, which adds refreshing fizziness.

About The Krafty Braumeister

The Krafty Braumeister was founded by Uli Schiefelbein in 2018. Uli’s love for brewing began when he was working in Baghdad, where the only available beers were canned, stored at temperatures above 40°C and brewed under license of two of the world’s biggest breweries. There was only one solution: to brew his own. Uli came to Suffolk in 2013 because of his wife Auriol. After studying historical German beer-styles and learning professional brewing in the UK, they opened The Krafty Braumeister.

Press release from the Krafty Braumeister