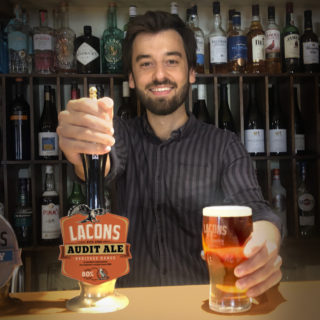 George, barman at the Horningham Buck near Norwich, the Lacons brewery tap

The CAMRA Champion Beer of Britain Awards is one of the most prestigious beer competitions in the world and a huge event in the cask ale calendar. This year saw 71 breweries competing for the coveted title of the Champion Beer of Britain Award after months of tasting panels and regional heats across the country judged beers on appearance, aroma, taste and aftertaste across 10 categories.

Brewed at Lacons’ Falcon Brewery in Great Yarmouth, Audit Ale was re-introduced to the Lacons range in 2014 and is a resurrection of the world-famous Audit Ale of the 20th Century, originally brewed for Cambridge University colleges.  It is an 8.0% ABV barley wine with a deep copper hue and is aged for a minimum of three months to develop the rich flavours of berries and warm spices befitting its style.

Audit Ale was named Champion Winter Beer of Britain at the Great British Beer Festival Winter in Norwich earlier this year which assured its entry into the finals. Although Audit didn’t win the main award, the Lacons team were still celebrating being in the finals.

“We were up against some great breweries and beers.” said Managing Director Mick Carver “It’s really gratifying to get this level of recognition from the CAMRA judging panel and to have made it this far in the competition.”

In recent months Lacons has received worldwide recognition for Encore, our flagship amber ale.  The Lacons team, who have worked tirelessly over the past six years to develop and maintain the quality beers we have become famous for, were at the awards when the results were announced on Tuesday.

Beer lovers can try Audit Ale for themselves with a limited release at the Lacons brewery tap, the Horningham Buck near Norwich.