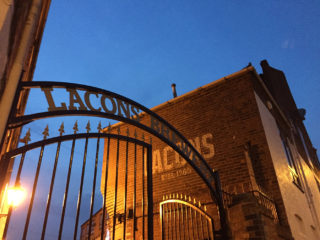 Great Yarmouth based brewer Lacons has joined the Guild.

Lacons was originally founded in 1760 and steadily expanded to include two sites and over 150 pubs across East Anglia and London until a takeover in the 1960s led to the cessation of brewing. Interest in this iconic local name was revived in 2009 and we resumed brewing in 2013.

The Lacons brewery of 2019 is a contemporary facility with a state of the art brewhouse. Our beers use the original Lacons yeast, which was archived in Norwich in 1960, local East Anglian malts and whole cone hops from the world’s most reputable growers.

Head Brewer Wil Wood – previously of Fyne Ales and Oakham – creates cask ales which are both contemporary and firmly rooted in the ethos of the original Lacons Brewery.

The past six years have seen a huge resurgence of popularity for our beer. In February this year, Lacons Audit Ale, our 8.0% barley wine, was awarded the prestigious CAMRA Champion Winter Beer of Britain 2019. Our flagship amber ale Encore has also been in the limelight, winning multiple awards including a bronze at the International Beer Challenge in 2018.

Lacons Managing Director Mick Carver said: “At Lacons, we continue to build on our successes, developing our keg beer range and collaborating with brewers locally and nationally to create exciting small batch beers.

“We’re delighted to be joining the Guild of Beer Writers and looking forward to meeting members over the months and years ahead, and supporting the beer writing community with our brewing and beer expertise.”

Members interested in visiting Lacons, sampling their beers, or with any other questions, should email info@lacons.co.uk

The Guild now has more than 60 corporate members including global, national and regional brewers, brand owners, distributors, pub companies, suppliers to the industry and trade associations.  To find out more about joining, view our  corporate membership brochure