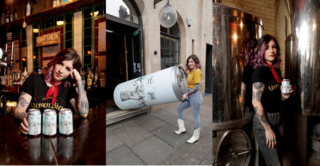 Laine Brew Company, the independent pub and brewing business with over 60 bars and brewpubs from Brighton to Birmingham, is unveiling a new brewing apprenticeship scheme that seeks to attract and inspire budding brewers from diverse backgrounds to join its rapidly growing brewing operations. The apprenticeship scheme will be announced at the first One for All Festival at the Four Thieves pub in Clapham Junction on Wednesday 20th November.

“We want to encourage those from diverse ethnic, cultural and socio-economic backgrounds to consider a career in brewing. To do this we have decided to launch the One for All Festival where individuals from underrepresented groups will discuss what more needs to be done to help the brewing industry become more inclusive. As part of this festival we will be introducing our first best-in-class apprenticeship programme in conjunction with the Hospitality Industry Training and University of Nottingham’s International Centre for Brewing Science that will aim to start transforming the make-up of our brewing team,” says Brewery Director, Jack Hibberd.

Taking learnings in diversity from the US craft sector, Laine is hosting American beer brewer and blogger, Megan Stone, on a UK tour to speak on the topic and take part in a special brewing collaboration.  The One for All Festival will see her brew three new beers, speak at a range of events as well as launch the new apprenticeship scheme.

As part of the initiative, Laine is hosting an event at one of its leading London pubs in Clapham Junction, the Four Thieves, on Wednesday 20th November. The event will hear diverse voices from the industry tell their stories of how they made it in the beer industry. Laine pubs across the country will also feature beers brewed by brewers from diverse background in the week of the festival.

Megan Stone is a brewer from the USA and runs the popular Instagram account @isbeeracarb. She has brewed at a number of leading US breweries such as Modern Times in San Diego and Duclat in Baltimore. Amongst Megan’s limited-edition brews in the UK, she will create a hazy IPA called All for One, that will be available on draught in the Laine estate of pubs and Mitchells & Butlers brand, Castle. A canned version will also be available for sale on www.laine.beer and in selected off licences.

“In the US, I’ve learned you have to fight and be pushy to get on in the sector. No-one necessarily gives you permission as a female or as a person of colour. As a young gay woman, I still have to constantly prove myself to be worthy of a place in the industry. Laine launching an apprenticeship scheme to literally invite people in is a fabulous move. More perspectives in the beer making process – from people coming together – all unique in their own way – will give us new tastes, inspirations and influences and that is not just a positive way to go – it is the right way to go and we can all benefit – workers, colleagues, friends and drinkers,” said Megan Stone.

The Laine Brew Company Apprenticeship Scheme is provided by the Hospitality Industry Training Brewer scheme in conjunction with the University of Nottingham’s International Centre for Brewing Science. Laine is offering one apprenticeship each year the chance to learn the various skills and crafts in beer brewing. The first apprenticeship will begin in May 2020, based in either London or Brighton for approximately 18 months. Applications are open between November 28th and December 23rd 2019 can be made on the website www.laineapprenticeships.beer.

For further information please contact Way To Blue at laine@waytoblue.com

Taking its inspiration from vibrant pub and beer scene in the city of Brighton and Hove, Laine Brew Co creates beer imbued with flavour, experimentation and good times. Its beers are unpasteurised and uncompromising, meaning more flavour and more love. With a focus on consistent, sessionable beers supported with market-leading design and POS, Laine creates highly individual and authentic craft beer which is accessible to all. Laine Brew Co operates a production brewery in the South Downs, as well as brew pubs in Brighton, Clapham and Hackney. Owned by the Laine Pub Company – one of the UK’s most forward looking, exciting and dynamic pub businesses – Laine Brew Co expanded out of its Brighton heartland into national sales during 2018.  Since then it has seen significant consumer demand for its portfolio and has become one of the fastest growing breweries in the country. Its award winning beers can now be found in hundreds of UK pubs, including Source (4.1% Pale Ale), Ripper (4.9% Session IPA), Mangolicious (4.7% Session IPA), Word (4.5% Lager), and a new low-alcohol beer King Limbo (0.5% IPA) as well as a number of other seasonal beers.