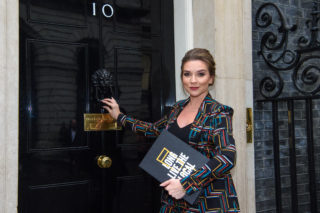 Publican Candice Brown has today delivered a petition of over 200,000 Brits to the Prime Minister’s front door, No. 10 Downing Street. The urgent plea calls on the Government to cut beer duty to help support UK pubs. It follows research that shows 5.7 million Brits(1) could lose their local pub in just five years if some of the financial pressures facing our pubs are not eased in the upcoming Autumn Budget.

Great British Bake Off winner turned Publican, Candice Brown was joined by fellow publicans from across the UK to deliver the Long Live The Local petition to Downing Street. Together they hope to demonstrate just how important the local pub is to communities nationwide and show the significant role pubs play in British culture. Recent research shows that three quarters (72%) of Brits think pubs are important to local communities, whilst two thirds (67%) are adamant that pubs are vital to securing the future of the high street(2).

Now the British public is calling on the government to recognise the plight facing UK pubs. To date, 208,022 people have signed the Long Live The Local petition, which asks the government to cut beer duty. Since January 2019, 101,087 people have sent letters to their MPs asking for their support to stop local pubs from closing.

According to recent research, half of (48%) Brits(3) think that the Government should be doing more to support pubs. Currently, three pubs close their doors every day in the UK as a result of the financial pressures they are facing.

Candice Brown, publican of The Green Man, says: “I am at Downing Street today to stand up for something I firmly believe in – the local pub. A belief I share with over 200,000 people. Pubs need support from the government to survive and today we implore the Chancellor to cut beer duty to help keep pubs open and prevent communities from shouldering the social and cultural cost of losing them.”

David Cunningham, Programme Director for Long Live The Local, adds: “This is an issue close to many people’s hearts. We urge the Government to listen to the hundreds of thousands of Brits who have signed the petition already and cut Beer Duty at the next budget. Pubs are under increasing pressure. Action needs to be taken to help them & the communities they serve.”

For more information on Long Live The Local and to sign the petition, please visit here.

For further press enquiries or to arrange an interview with Candice, or a Publican, please email BBA@onegreenbean.com .

The publicans that attended Downing St are:

• Are Kolltviet, The Chandos Arms – London

Long Live The Local is a campaign, backed by Britain’s Beer Alliance, that celebrates the positive role that pubs play in our lives and communities. It highlights the jeopardy that our pubs face from a range of tax pressures, including beer duty, business rates and VAT.

In 2018, the Chancellor listened to the voices of 116,794 Brits, who signed the petition to cut beer duty. 48,160 of these wrote directly to their MPs directly asking them to support a cut.

The Alliance consists of over 200 members including independent pubs, pub companies regional, independent and international breweries, and industry organisations.