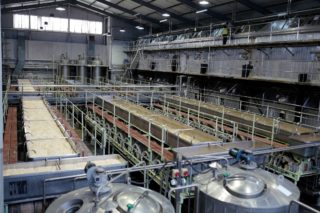 No:1 Horninglow Street IPA is the first in a series of speciality one-off beers to be brewed in Marston’s legendary Burton Union system.

This is the first beer that Marston’s has produced from the system’s renowned oak barrels, ‘swan necks’ and yeast troughs aside from their iconic Pedigree and celebratory pale ales.  Brewed at 7.4% abv, 32,000 individually numbered bottles of this new IPA will be available from June in 300 Waitrose stores at £4.50 per 50cl bottle, each packaged in its own box.

The initial design stage for each beer in this series of limited editions begins in Marston’s DE14 nano-brewery, installed in 2016 by Marston’s with the ambition of trialling new brews.  The beers are then transferred across the brewery yard to the colossal, symmetrical brewhouse, known locally as ‘The Cathedral of Brewing.’

The Horninglow Street speciality beers have been named after the original brewery at which John Marston’s started brewing in 1834, the Horninglow Brewery in Burton Upon Trent.  They will be available initially only in bottle, and each will celebrate a different beer style.  Since the complete series will be bottle-conditioned, the un-pasteurised beers will develop for years in the bottle, allowing the beer drinker to take on the mantle of the brewer, and to decide at what stage they wish to stop the beer’s journey of conditioning, and to broach the bottle.

No:1 Horninglow Street, the first in the series, is a 7.4% India Pale Ale, paying homage to the IPA beer style that Burton made its own from the 1820s onwards.  The global exportation of IPA is renowned, beers brimming with hops and alcohol and with the firm body to withstand the beers’ long sea voyage to India.

Burton is known as the home of Pale Ale, benefitting from its gypsum-rich water, which gives definition and edge to hoppy beers. Since the 1860s, brewers all over the world have often ‘Burtonised’ their water, attempting to mimic the natural benefits of Burton’s water when making pale ales.

IPA was the Chardonnay of its age, its pale amber colour elegantly visible in the clear glasses of the mid-19th Century, which had replaced the earlier pewter, ceramic or dark glass tankards.  Before that, according to beer historian Martyn Cornell, there were no beer glasses, unless you were rich, until the tax came off glass in 1845, with pewter, ceramic, horn, leather or wood prevailing.

No:1 Horninglow Street IPA has been brewed with low-colour pale ale malts, and then been both ‘late’ and ‘dry’ hopped with four hop varieties: Goldings, Sovereign and Ernest from the UK, and Cascade from the USA.

Fermentation begins in rectangular ‘squares’ and after 2 days is transferred down into 24 interlinked 150-gallon oak barrels, known as a Burton Union ‘set.’ This historic process excites and invigorates the yeast, clarifying the beer and leaving unwanted flavours and dead yeasts behind.  The beer ferments there in the sets for five further days, with the yeast bubbling for the initial two to three days through stainless steel swan necks – like shining periscopes – into a yeast trough above. This offers a CO2 protection for the beer, and the yeast is collected to be used as a stimulus for other beers or sold for Marmite.

All of the important temperature controls are scrutinised by the experienced eye of the ‘Cathedral’s’ brewers.

The Burton Union Sets were previously made with English and then Baltic oak, but more latterly with German or Polish oak. As and when barrels need repair, Marston’s cooper Mark Newton takes fundamental care to avoid introducing any fresh oak flavours or tannins to the beer.

The final ‘cold conditioning’ for three days locks the hops’ flavours and subtle malt aromas into the beer.

No:1 Horninglow Street IPA has a gentle honied aroma with hints of apricot, and crisp citrus notes on the palate.