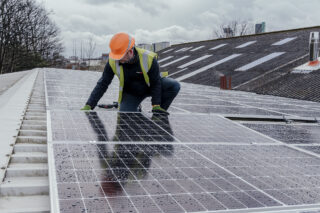 Once open on Friday 16th April Springwell, located in a former tannery on Buslingthorpe Lane, will see North Brewing Co double its capacity and open a new 500 person taproom, in a move that will co-locate the firm’s bar and brewery headquarters under one roof.

These solutions form part of North Brewing Co’s wider sustainability strategy at Springwell, with other initiatives implemented including sustainable sourcing of merchandise and workwear, new operating procedures placing recycling at the heart of the brewery’s operations and encouraging green modes of transport through the firm’s cycle to work scheme.

Following a full site energy audit, Planet-U’s engineers provided the installation of 104 solar panels to the site’s roof space, which will generate an estimated 36,700 KW annually. This equates to an average annual saving of around £6,653 per year, or a ROI of less than 5 years.

The renewables firm also provided a 22kW EV rapid charger installation which will charge vehicles on site in around one to two hours.

During the lifespan of the renewable technology, it is estimated it will generate total savings of more than £160,000 compared to traditional energy sources.

“It has been great to deliver this project at Springwell for North Brewing Co and our partnership is a fantastic example of how renewable energy procurement and energy saving technology can benefit breweries. By moving away from traditional sources of energy, North Brewing Co will save money on their electricity bills, whilst also becoming more energy efficient.

Tom added: “Despite the additional challenges of completing the installations during Covid restrictions, we were able to complete all of our works on time whilst the brewery remained operational in anticipation of its opening. This has been a flagship project for us and we hope it will be the first of many for us in the brewing industry.”

“Adding a renewable energy solution at Springwell was an easy decision for us to make, since we were looking to become more sustainable in our operations as well as reducing our energy costs.

“It has been an exciting time for us, with so much activity taking place despite the pandemic and we’ve adapted to not only keep the business running but growing as well. With our move to Springwell, we also wanted to step back and look at how we could do things more sustainably while still making progress.”

John added: “The transition to Solar PV and EV charging is a great move for us, it will help reduce our carbon footprint and move the business forward in line with the Government’s 2030 decarbonisation targets. Planet-U Energy has helped make this a seamless process, providing fantastic consultation and customer service throughout both the energy audit and installation process.”

For businesses interested in making the transition to renewable energy, Planet-U Energy has strategic partnerships with multiple large investment organisations and lenders which can provide customers with funding options. These include but are not exclusive to:

To find out more about how Planet-U can help your business, visit planetuenenrgy.com/get-in-touch/

They have since expanded the North Bar family of bars to six venues and two brewery taprooms. In 2015 they turned their 10-year dream of making their own beer into a reality by opening an independent craft brewery, North Brewing Co, just half a mile from their original flagship North Bar in Leeds. North Brewing Co moved to their new home, Springwell on Buslingthorpe Lane, in November 2020.

Planet-U is a renewable energy solutions company that believes a sustainable future starts with the businesses that power our world.

Our mission is to make renewable energy totally transparent so that every company can take action for a more sustainable tomorrow.

Founded in 2018 by CEO Grant Nicholson to disrupt the energy market and change how businesses buy, use and save energy, we believe that every business can become sustainable whilst staying profitable.

We pioneer technologies to reduce how much energy your business uses. Targeting specific areas if your energy eco-system such as Solar PV, LED Lighting, Voltage Optimisation, Power Factor Correction and EV Charging to ensure that saving money and saving the planet isn’t a choice in renewable energy procurement.