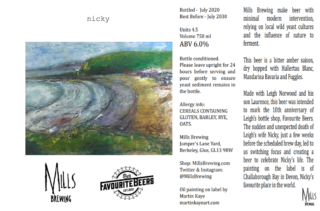 Thursday 8th October marks the 10th Anniversary of Favourite Beers – Cheltenham’s multi award-winning bottle shop and bar. Owner Leigh Norwood opened the shop in October 2010 and has since run the operation with his daughter Rosie.

The collaboration beer with Jonny Mills of the highly acclaimed Mills Brewing was originally planned to mark the anniversary of the shop, but very sadly, just three weeks prior to the planned brew day last March, Leigh’s wife ‘Nicky’ died very suddenly and unexpectedly from a brain aneurism. Leigh decided he still wanted to go ahead with the collaboration, but he asked that it be brewed in memory of his wife.

The beer called ‘nicky’ will be launched at Favourite Beers on their 10th Anniversary (February 8th) on keg and available in 750ml bottles. The label features an original painting by Martin Kaye depicting Challaborough Bay in Devon – Nicky’s favourite place in the world.