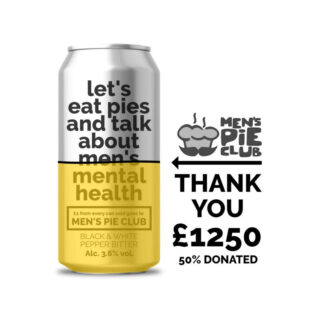 McColl’s Brewery is proud to announce that the halfway mark has just been reached in their target to raise money for Men’s Pie Club (MPC) to help tackle social isolation in men across the North East of England.

The North East craft brewery collaborated with MPC late last year to brew a traditional bitter (with a twist), with £1 from every can of beer sold being donated to the club. They hope to raise £2,500 in total, which will enable Men’s Pie Club to continue their great work.

Men’s Pie Club is about local guys, making pies. Supported by Food Nation, a social enterprise based in Newcastle, MPC was developed in response to the need for increasing levels of social connections and feelings of belonging for men in the North East of England.

A sense of priority


Jamie Sadler, from Food Nation, Harissa Kitchen and Men’s Pie Club is possibly one of the most unselfish men on the planet, and has a knack of bringing people together through food and creativity.

Over the past few years, McColl’s Brewery had been planning creative collaborations with Harissa Kitchen, but for many reasons they‘ve always sat on the back burner (less important, dull matters seem to get in the way). Cue the pandemic, where reassessing what it is you do has provided a sense of priority in many peoples lives. So, in late October in a fleeting phone conversation, this creative fund-raising collaboration was born.

It’s very close to the hearts of all involved

‘Let’s eat pies and talk about men’s mental health’ is not only raising funds – the hope is to use the beer and the collaborators’ social media platforms to help to raise awareness for MPC and the great work they do; to further the conversation of social isolation in men, and explore the way that community plays its part in helping everyone to feel they belong. Beer can be a great opener with these important conversations, together with pubs, food, responsible drinking and a sense of community. And not forgetting pies, where all of this started.

Danny McColl, Co-owner and Head Brewer at McColl’s Brewery said “We’re so grateful to everyone who’s shown their support for this campaign; to have raised £1,250 and reached the halfway mark is amazing! But there’s still so much to do to reach the full target and help so many people who are really struggling with their mental health right now.”

Jamie Sadler, Founder of Men’s Pie Club added “We’re very proud to be collaborating with McColl’s to make this happen, they completely understand what we are trying to achieve with Men’s Pie Club – and they make incredible beer!”

A traditional Bitter, relatively low in alcohol at 3.6%, cold filtered through a blend of crushed black and white pepper, and purposefully created to perfectly accompany a tasty pie.

‘Let’s eat pies….’ is available across the UK from independent venues and via the McColl’s Brewery webshop (UK wide delivery) – www.mccollsbrewery.co.uk

About McColl’s
Based in County Durham, Daniel and Gemma McColl launched McColl’s Brewery in spring 2017. Inspired by traditional British, Belgian and new wave beer styles they look to create beers that everyone can enjoy.