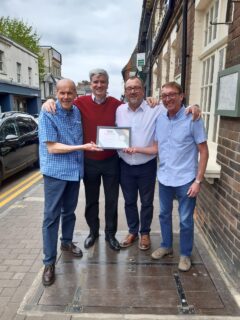 Barry Dennis and Philip (“Phil”) Wheeler celebrated their 43rd anniversary as the licensees of the Anchor in Sevenoaks, as well as signing another 10-year contract with leading community pub company, Admiral Taverns.

Barry and Phil started their journey in the hospitality industry in the mid-1970’s, and have both owned and run pubs, including the St Christopher Inn – formerly The Prince of Orange – in Greenwich. They took over the Anchor in 1979 and are still at the helm over four decades later. The two signed their new tenancy agreement with Admiral Taverns’ Managing Director, Ian Ronayne and Business Development Manager, Paul Gornall on-site.

Barry and Phil have spent the last 43-years creating a go-to social hub for the community, supporting local businesses and giving the locals a pub to be proud of. The licensees are popular in the area and well known for regular events, including hosting food trucks and beer tasting evenings.

Barry Dennis, Licensee at the Anchor, said: “The last 43-years at the Anchor have been fantastic! Both Phil and I are so grateful to our incredible team, the local community, and of course to Admiral Taverns for all their support. A lot has changed since 1979, but we love it here in Sevenoaks and are looking forward to the next 10 years.”

Phil Wheeler, Licensee at the Anchor, added: “Time really does fly when you’re having fun! We’re extremely proud of what we’ve achieved at the Anchor and hope we can continue to serve the residents of Sevenoaks for many more years to come.”

The Anchor hosts a wide selection of draught lager, real ale, wines, and spirits, as well as a small but tasty food menu for customers to enjoy. It includes traditional pub favourites such as homemade pies, burgers, sausages and mash, as well as Sunday roasts.

Customers are treated to regular entertainment, in the form of quiz nights, Tuesday darts tournaments, Monday poker competitions, and live music on Wednesday and Saturday evenings.

Paul Gornall, Admiral Taverns’ Business Development Management, said: “Congratulations to Barry and Phil for such an amazing achievement! Our business is dedicated to working with charismatic licensees who have a passion for, and are at the heart of, their communities. It really has been a privilege watching the two of them do what they do best and working with them to make the anchor a long-term sustainable business. We wish Barry and Phil the very best for the future.”

Admiral Taverns (“Admiral”), is the UK’s number one community pub group. Headquartered in Chester, the Group operates a national estate of c.1,600 predominantly wet-led community pubs. Admiral’s unique operational approach has earnt industry recognition with the Group awarded Best Leased and Tenanted Pub Company in 2019, 2016 and 2013 and ranked highly commended as Best Community Pub Operator in 2017. The Group has also been consistently highly rated by licensees in the industry’s independent annual Tenant Track survey, exceeding the scores of all its national peers, as well as by the Pubs Code Adjudicator (PCA), who in its 2022 annual report, highlighted Admiral Taverns as leading from the front in terms of support for its licensees during the pandemic.