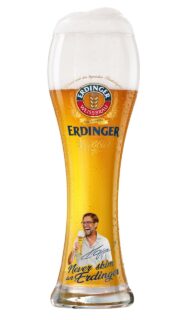 Sainsbury’s is offering customers the chance to capture one of the summer’s most highly sought-after promotional items; a limited edition ERDINGER Weissbier glass featuring an image of Jürgen Klopp. The glass has been produced as a premium giveaway to mark Klopp’s role as ambassador for the Bavarian brewery and follows the release of an advert in which Klopp gives instructions to “never skim an ERDINGER”.

The promotion will run in selected stores from 16thSeptember until stocks last and for every bottle of ERDINGER Weissbier purchased, customers will receive a limited-edition Jürgen Klopp glass.

“Since Jürgen was announced as the ERDINGER ambassador, it has become increasingly obvious just how much he is loved and revered by the British public” commented Peter Gowans, ERDINGER UK Country Manager. “The advert and subsequent release of a limited-edition red can bearing his image have generated high levels of brand awareness, sales and social media interaction. A version of this special glass was originally released in Germany but there has been so much interest that we wanted to make it available in the UK and are thrilled to be working with Sainsbury’s to say thank you to loyal ERDINGER fans for their support in this country.

“Not only do we expect it to be a big sales driver within Sainsbury’s but, such is the interest already received, that we expect the glass to become a collectors’ item.”

The half-litre glass is offered in a presentation box that carries a guide to the perfect pour to retain the classic ERDINGER Weissbier foam head and will be supplied with every purchase of a 500ml bottle of ERDINGER Weissbier in selected Sainsbury’s stores, subject to availability. The usual depiction of the Erding landscape, where the wheat beer is brewed, on the glass has been replaced by an image of Klopp, his signature and the campaign strapline ‘Never Skim An ERDINGER’.

“Fans have been interacting with the online content featuring Jürgen, through social media and theFANtasticERDINGER show content hub” added Gowans “and are desperate to get hold of the glass. Although they can be ordered through the Germanfan shop website, this is a one-time opportunity to pick up a glass with their ERDINGER Weissbier when they visit their local participating Sainsburys store.”

Jürgen Klopp was announced as the ERDINGER Weissbräu ambassador at the beginning of March and the campaign has included outdoor advertising and promotional purchase pricing in the off-trade as well as the advert, red cans and limited edition glass. It has been developed to reflect ERDINGER and Klopp’s shared enjoyment of life and uncompromising pursuit of quality, and is characterised by Jürgen’s easy going, approachable style and charisma.

ERDINGER Weissbräuis a private brewery, established in 1886 in the small town of Erding, Bavaria, on the outskirts of Munich. For over 130 years, the outstanding quality of their wheat beers has been rooted in their passion for Bavarian brewing skills. They have always brewed exclusively in Erding and never brewed anything other than the Bavarian speciality wheat beer.