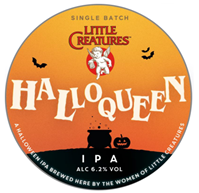 HalloQueen IPA celebrates all things Halloween and women in the brewing industry. Head of Brewery Operations, Rebecca Crotty Jones gathered her predominately female cross functional team at Little Creatures micro-brewery to create this new brew whilst learning about the historic role women have had within the brewing industry.  The limited-edition IPA is a combination of 6 grains and 6 hops from across the world with the combination of hops creating an east coast meets west coast IPA, each hop was chosen because of the brands global backgrounds meaning it’s a truly International Pale Ale!