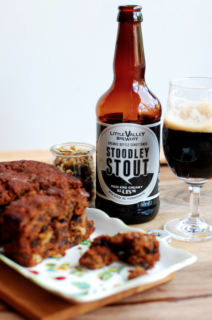 With The Great British Bake Off returning to our screens next week, Yorkshire-basedLittle Valley Brewery is encouraging viewers to get inspired by the show and get cooking with beer. Little Valley Brewery’s master brewer and former food scientist, Wim van der Spek, provides his top tips when it comes to incorporating beer into culinary creations.

“Beer can create another dimension of taste as an ingredient in a variety of dishes, as sweet, sour and bitter tasting notes can all be found in beer – working with other ingredients to create something really special. The bitterness in beer can become overpowering, so it’s important that in lighter dishes only a small amount is used – but what is left can be served with the dish, so it’s win-win!

These sorts of beers are perfect with fish or seafood dishes, as the limited bitterness gives an additional kick of flavour without overpowering the delicate fish. The acidity of the beer also gives the dish a more rounded savoury taste, for example, a wheat beer is a perfect match for mussels as an alternative to traditional white wine.

Due to their strong hoppy flavour, these beers are great for use in more neutral dishes to give them additional aroma and extra taste. The combination of hops with the lighter flavour means that the chosen beer needs to be used in moderation, otherwise the bitterness can dominate the dish – a great example of this working well would be a pale ale used in an asparagus soup to add another layer of subtle flavour.

These beers, which are becoming more popular as the craft beer movement continues to grow, can be used in a wide range of dishes. In general, fruit beers tend to be less bitter so can easily be used in desserts, and beers with more savoury-suited ingredients such as ginger are perfect for adding complexity and savoury notes to Asian dishes, working particularly well with the spices in curries.

Dark, rich beers can be used in ‘heavier’ dishes, particularly suiting red meat dishes due to the roasted caramel taste notes. The additional sugars and acidity of the beer itself complement the rich meaty flavours, and also make the meat softer and tender. Darker beers also work well when added to cakes and puddings, again due to the caramel notes, with any bitter taste being reduced by the high amount of sugars in the cake mix – we would highly recommend this to the Bake Off contestants!”

For those that are feeling inspired by Bake Off (even with the lack of Mary Berry!), Wim has provided his own recipe for a beer cake:

Serve a slice of cake with a glass of the remaining Stoodley Stout.