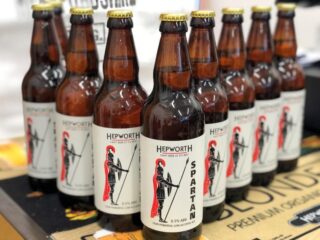 West Sussex based Hepworth & Company Brewery has increased its range of beer by launching The Right Stuff, an organic ale made with locally sourced barley from Sussex and organically grown American style hops.

The Right Stuff is brewed from Chinook and Cascade hops to reflect its American nature. The result is a naturally carbonated, gluten free and vegan friendly ale which is full and fruitily flavoured. It is 5% ABV and has been bottled conditioned so it improves with time. In addition, The Right Stuff contains no additives or preservatives.

Whilst Hepworth & Company Brewery has brewed and developed many styles of beers over its 20 year history, this is the first time it has developed an organic American style ale due to difficulty in ensuring such specialised hops.

The idea for the ale’s name came from the term “Right Stuff”, coined by novelist Tom Wolfe to describe an indescribable magic quality. The label design also has a nod to the author’s topic of choice, the space programme, with an illustrated moon hovering above the beer being poured into a glass.

Head Brewer and Managing Director, Andy Hepworth, said: “Over the last 20 years, reliably sourcing quality organic hops has become much easier and we are lucky enough to have high quality barley on our doorstep in Sussex. Hepworth has long wanted to make an APA that truly shows the best example of this style and now, thanks to the improved quality of ingredients available to us, we can for the very first time.

“The name for The Right Stuff came from novelist Tom Wolfe, who coined the phrase when writing of the qualities to make the grade as supersonic test pilots and astronauts. They had to have necessary range of skills but also that extra non-specific quality, ‘The Right Stuff’, the quality that made the difference. When we developed this beer from American and British style hops, we realised we had made The Right Stuff ourselves!”

In another first for the company, Hepworth & Company Brewery launched its first own-brand low alcohol beer, Spartan, earlier in January 2021.

Spartan is a British Style pale ale which uses a complex grist of speciality malts that limit the fermentation to 0.5% ABV, resulting in a rounded body that would normally be expected in a full-strength beer.

Hepworth & Company has a range of 14 beers and lagers, the majority of which are gluten free and suitable for vegans, thanks to the brewing process on certain beers used that removes gluten naturally. Many of the company’s beers are stocked in national retailers such as Marks & Spencer, Coop, Tesco, Waitrose and Morrison’s.

Hepworth & Company is also leading the way when it comes to sustainability in brewing, being the proud pioneer of a beer sourced heat pump which is powered by their own solar panels.

The Right Stuff is available to purchase alongside all of Hepworth’s other beers from www.hepworthbrewery.co.uk or Hepworth’s Brewery Shop in 12x500ml bottles. Prices available on request online and home delivery is available for retail purchases.

Hepworth & Company is an award-winning brewery, creating craft and contemporary beers for both on and off trade as well as white labelling services. Hepworth & Company attributes its success to its core philosophies of traditional brewing methods, local sourcing of the main ingredients of the beer to the highest standard, and tremendous craftsmanship that results in the perfect pint.

Hepworth & Company has a range of 14 beers and lagers, the majority of which are gluten free and suitable for vegans, thanks to the brewing process on certain beers used that removes gluten naturally. It is also looking to diversify into low alcohol beers and flavoured beers in 2021.

Hepworth & Company is also leading the way when it comes to sustainability in brewing, with its site in the heart of West Sussex being the proud pioneer of a beer sourced heat pump.

Hepworth & Company also produces beers for other household names, such as Marks & Spencer.

The brewery also has a brewery shop, visitor centre and tap room.