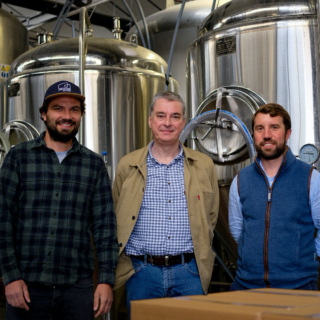 London Beer Factory have appointed John Keeling to their Board of Directors as a Non-Executive Director. Moving from his position at Fuller’s, John will step into the role with immediate effect as the brewery looks toward its next phase of expansion. Many in the industry will be familiar with John from his work at and directorship of Fuller’s, as an international beer judge and speaker, and as the incumbent Chairman of the London Brewer’s Alliance.

John initially joined Fuller’s as a Junior Brewer, holding various positions before culminating in his promotion to Brewing Director in April 1999. During his time as Director, over £60 million was invested in developing the brewery. “It is John’s experienced application of investment and proved growth which made John so promising to us at London Beer Factory. We are delighted to have him onboard.”, adds Sim Cotton, CEO.

John is an acclaimed judge and speaker of beer competitions around the world including Beer World Cups and the Australian International Beer Awards. Under John’s tenure Fuller’s won numerous medals for their beer, including the CAMRA Beer of the Year and gold medals at the Beer World Cup. In December 2017, John was appointed Chairman of the London Brewers’ Alliance. He has been instrumental in supporting the craft beer movement and is the inspiration for many of today’s young brewers. “Having such a respected figure of British brewing is a real coup for the company – and underlines the aspiration and success we want to establish for the brewery”, says Sim.

Joining a board that includes brothers Sim and Ed Cotton, their father Neil, and Johan Spendrup (Vice-CEO of Sweden’s Spendrups Brewing) John will advise and direct the London Beer Factory as it aims to capitalise on strong YoY performances by growing its bar estate, investing in new brewery equipment, and relocating to a larger site. John notes: “I am thrilled to be a part of an exciting brewing project that has real ambition, established progress, and is operating in unique spaces within the UK’s craft beer scene.”

London Beer Factory is an open exploration of beer, a journey into its shared moments and enjoyment. Modern and proudly independent, we have been crafting progressive beer since 2014 from our home in South London. Our blendery, The Barrel Project, is an expression of our love for the spontaneous and wild. Producing barrel aged and alternatively fermented beers from a hybrid space on the Bermondsey Beer Mile.