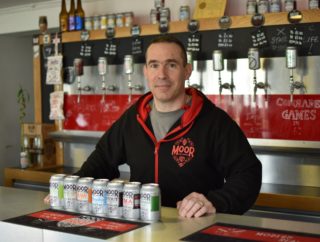 The day will kick off with a trade session at 15:00, opening to the public at 17:00. Then from 18:00 the venue will host the UK leg of the renowned Arrogant Sour Beer Festival tour. An annual event in Italy, this year it has expanded to bring a taste of the festival to eight locations across Europe. Festival organiser, Alessandro Belli, was determined that the British stopover would be with long-term collaborator Justin Hawke, Moor Beer’s owner and head brewer, and the rest of his team.

For the independent craft brewer, the new location supports the present and future growth and the ambition to bring flavoursome beers to a new audience. Moor Beer now have the capability to increase distribution and expand their network of stockists across the capital and the South East.

Speaking about the opening, Justin Hawke said: “London and Bristol represent two of the most exciting craft beer scenes in the world, so we’re incredibly proud to build our presence in both locations. Opening our vault on the Bermondsey Beer Mile is the natural next step for Moor Beer – a bold move for a small, family-owned business.

“We have worked incredibly hard the past 11 years, continually reinvesting to grow our business in an ethical and sustainable way. We don’t believe in taking shortcuts, whether that is brewing the best beer or building a world class business. Our uncompromising standards have made us known for brewing consistently high-quality beer and operating with the highest level of integrity with our employees, suppliers, and customers.

“We have invested heavily so we can use the new space to increase the barrel ageing we have been doing since 2009. We will grow our barrel programme and kick off our sour beer production, working with some of the best sour beer producers from around the world to create mature beers of immense flavour and complexity.

“Developing new and flavoursome beers has always been at the heart of what we do. Most people know us for a small selection of our highly awarded core beers, but we have always brewed dozens of different beers every year. We are on a mission to get the word out about the full breadth of what we are capable of and now have a permanent showcase in our nation’s capital to do that.”

“The Arrogant Sour Beer Festival is one of the best events in the global beer calendar and it’s a privilege to share our opening night with the team behind the event. As a teaser for the festival in June, the quality of beer available will be amazing and will be the first chance for many in the UK to taste these beers.”

Moor Beer produces naturally unfined beers to retain the full flavour and freshness of the product. The approach, termed ‘modern real ale’ – extends across the entire range in all formats. Moor Beer is the only producer to have CAMRA approval for real ale in cans.

In 2017, Moor Beer celebrated its tenth year of business, won Champion Winter Beer of Britain, and was named ‘Brewer of the Year’ by the British Guild of Beer Writers. It has recently become the first brewery to continuously supply British cask beer internationally and exports to 20 countries.

Moor Beer was born in 2007 when Justin Hawke purchased a defunct brewery based in the Somerset Levels and Moors. With it’s headquarters now in the centre of Bristol and a site in London, Moor Beer has become one of the world’s top-rated breweries regularly winning national and international awards.

In 2017, Justin was named ‘Brewer of the Year’ at the British Guild of Beer Writers’ awards.

Having kicked off the unfined beer movement in the UK to produce products that do not compromise on flavour and aroma, Moor Beer is the first brewer to be accredited by CAMRA for cask, keg, bottle and can.

Moor Beer’s inspiration mirrors the journey of its founder. Born in California and enjoying beers with intense hop flavours, Justin joined the US military where time stationed in Germany introduced him to naturally hazy ales. Trips to the UK meant the discovery of secondary fermentation and highly drinkable and well-balanced beers.

The result is what Moor Beer Company prides itself on – Modern Real Ale.