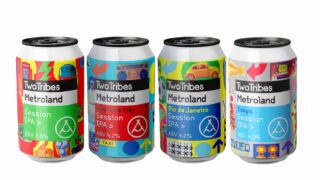 At Two Tribes Brewing, beer is just one part of a creative lifestyle. Based in Tileyard, Kings Cross, London, Two Tribes brew a range of bold, delicious beers that stand out on the shelf and from the crowd.

They have built their brand around BEER + MUSIC + ART, spreading their passion for creativity through collaborations with a range of industries and partners, including: record companies, Michelin star chefs and football brand COPA90.

Over the weekend, Two Tribes launched their Metroland World Tour case, complete with four versions of their core beer, Metroland session IPA. Each one is inspired by one of the team’s favourite cities.

This box aims to take drinkers (and their taste buds) around the world at a time where we can’t physically travel without a quarantine period.

The case includes:
METROLAND (LONDON): The OG. Effortlessly cool like a Shoreditch type who only supports independent and spends most of their time lurking in industrial taprooms or the hottest new pop-ups. Light bodied and easy to drink with a citrusy aroma of orange peel and papaya. (3.8%)

METROLAND NYC: Bright fruit flavours of mango, papaya and seville orange. It’s as refreshing with a corn dog on Coney Island as it is in the stands at the ballpark or while walking your trendy dog through Brooklyn, or why not have it with a slice? (4.2%)

METROLAND RIO: Take a metaphorical stroll down to Ipanema as you sip on this wheaty session IPA with flavours of passionfruit, peach and soft citrus. Hopped with Mosaic and Galaxy. (3.9%)

METROLAND TOKYO: Let this beer take you down to Omoide Yokocho at Shinjuku, where all the Izakayas tempt your senses. Brewed with rice for a dry finish and hopped with Azacca and Summit producing flavours of intense but refreshing citrus with floral side notes of pineapple. (4.0%)

‘Metroland can represent any Metropolis on the globe. With the recent travel ban in mind, we combined imagery and ingredients to ignite the flavour and cultures of four of our favourite Metrolands.’

Christoffer Tuominen, head brewer, explains the concept behind each of the beers:

‘For New York I wanted to pay homage to the classic American IPA so we’ve used caramel malts to fill out the body and pushed the hops for more bitterness to get that oh so satisfying and moreish Seville orange flavour that just invites you for a second sip. With Rio my thoughts instantly went to Ipanema and the yellow colour of the Brazilian national teams home strip. So we set out to make a yellow and tropical beer that would be a real quencher on the beach. It uses a malt base that’s very close to an American wheat ale to make it super soft and yellow. We finished it off with some galaxy hops to evoke flavours of pêssego and maracujá.

Tokyo is inspired by the legendary Izakayas in Omoide Yokocho. What you really want to be drinking with all the savoury treats served up is something dry and refreshing. Brewed with rice for a dry finish and hopped with Azacca and Summit producing flavours of intense but refreshing citrus with floral side notes of pineapple. It’s great on its own or with a meal.’

During lockdown, Two Tribes Brewing upscaled their brewing capacity with new tanks from Europe. The install in the current ZIPTECH brewhouse increased capacity by 300%. This upgrade not only improved functionality, but included improvements to their canning line and the addition of a laboratory.

The Metroland World Tour case is now available from the Two Tribes webshop here. It is available as a 12, 24 and 48 can pack.

Download the high resolution images of the new cans here.

***
About Two Tribes:
Inspired by BEER + MUSIC + ART. Two Tribes brings like-minded creatives together through the brewing process. An independent brewery based in Tileyard Studios in King’s Cross, London, their small, passionate team get beer across London and beyond.

Two Tribes has done things differently from the beginning, driven by the spirit of collaboration across creative industries. This ethos is embedded at the heart of the brand: the moniker “Two Tribes” came from the idea of using the universal language of beer to work together with other artistic minds.

Their core beers, which include PowerPlant gluten-free lager (4.7%), Metroland session IPA (3.7%), Electric Circus American pale (4.7%) and Dream Factory pale ale (4.4%), are made for quality everyday drinking. These are supplemented with adventurous specials inspired by a sense of experimentation and fun, such as New Romantic passion fruit gose or Heavy Metal blueberry stout.