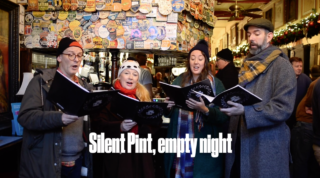 With just two weeks to go until the end of the year, Long Live The Local is highlighting the financial pressures pubs are facing over the festive season – with up to 48 pubs at risk of closure.

Pubs are a vital part of local communities, particularly at Christmas time. New findings from British Beer & Pub Association, indicates over 200m pints will be enjoyed in pubs over the festive period. Three out of four (72%) pubs across the country will also be open on Christmas Day, with one in three (34%) serving Christmas dinner to local residents.

To raise awareness of the importance of pubs and the issues that they continue to face, PR and creative agency, One Green Bean, worked with a carolling group to reimagine the lyrics of classic Christmas carol “Silent Night” to Silent Pint. The content released today, sees a quartet of carollers take to the streets with a new rendition of “Silent Night”, calling on the recently re-elected government to cut beer duty and help save our pubs from closing.

Watch the video here, as carollers sing about the plight facing pubs:

Kat Thomas, Founder and Executive Creative Director at One Green Bean says, “We have worked with Long Live The Local for two years to help save pubs from closing; it’s a passion that is close to our hearts. Pubs are a vital part of Christmas celebrations for most people and it’s sad to think that nearly fifty could close their doors before the end of the year, due to the financial pressure they’re facing. We hope this campaign will encourage people to sign the petition to cut beer duty and help keep their local pub open for many more Christmases to come.”

David Cunningham, Programme Director, Long Live The Local, commented: “Pubs are a vital community hub, particularly at Christmas time. What better place to toast the festive season and end the year? Sadly, local pubs are still closing due to financial pressures. It’s easy to forget the stark reality facing pubs amid the Christmas celebrations, and we hope Silent Pint will remind the Government how important it is to cut beer duty and help keep British pubs open.”

To support your local pub this festive season, share the video, sign the petition and email your MP to urge the Government to cut beer tax at longlivethelocal.pub.

About Long Live The Local

Long Live The Local is a campaign, backed by Britain’s Beer Alliance, that celebrates the positive role that pubs play in our lives and communities. It highlights the jeopardy that our pubs face from a range of tax pressures, including beer duty, business rates and VAT.

In 2018, the Chancellor froze beer duty, in response to 116,794 people who signed the petition to cut beer duty. 48,160 of these wrote directly to their MPs directly asking them to support a cut.

The Alliance consists of over 200 members including independent pubs, pub companies regional, independent and international breweries, and industry organisations.