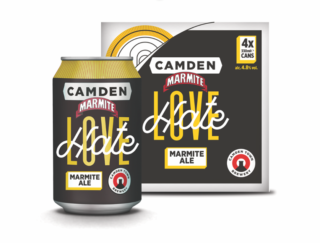 Self-confessed lovers of the savoury stuff, Camden Town Brewery has joined forces with Marmite in a move that combines Camden’s two greatest loves – beer and Marmite. Set to be (possibly) the most divisive beer out there, Camden has partnered with the nation’s most loved, and hated, spread to launch its brand-new Camden Marmite Ale.

A limited-edition beer that celebrates everything there is to love about the iconic spread, the new Camden Marmite Ale has been brewed with real Marmite for a punchy taste. For the lovers, this will be heaven, but for the haters – well, there’s still Camden Hells.

To create the new collaboration beer, Camden started with a combination of pilsner, Munich, Perle hops and smoked Rauch malt – one of the most divisive styles in brewing. The brewers then added Marmite, resulting in a smoky, Marmite-infused ale with a medium body and clean finish.

And this isn’t just a beer that tastes like Marmite. For those not already in the know, Marmite is a by-product of the beer brewing process, with most of the beer yeast produced in the UK then going onto produce the nation’s favourite toast topper. That’s why it made sense for Camden to actually add Marmite to its new ale, bringing that delicious taste to centre stage and bringing the yeasty journey full circle.

The pairing of a smoked beer with the umami flavours found in Marmite means beer lovers can expect initial upfront aromas of oak-smoked malt, followed by a full malty presence with the salinity and yeasty elements of the Marmite, all balanced by the sweet Munich malt.

Ashleigh Amos, Head of Brand Experience and Partnerships at Camden Town Brewery, said: “We couldn’t be more excited to bring all the lovers out there this brand new beer. As lovers ourselves, joining forces with Marmite is an amazing opportunity to really show off our brewing credentials. We immediately got to work on how we were going to bring the rich, smoky flavours alive, while keeping the freshest tasting beer our Camden lovers recognise.

“Marmite is such an iconic brand that’s been dividing the nation for over 100 years, so we couldn’t think of anyone more iconic to launch a collaboration beer with. Combining Marmite’s distinctive flavours with our never pasteurised beer might seem like an unlikely pairing at first – but trust us, you’re going to love it.”

Sophie Allan, Brand Manager at Marmite, said: “Marmite fans love it when we surprise them and put their favourite yeasty spread into new products, and this will be no exception.  Strictly for our over-18 fans only, with the help of our friends at Camden Town Brewery they’ll be able to enjoy the distinctive taste of Marmite in an ale. It’s no secret that our favourite toast-topper originates from brewer’s yeast, so we’ve simply gone full circle and put Marmite back into beer. Whether you’re a lover or a hater, this distinctive Camden Marmite Ale will be one your tastebuds will remember – cheers!”

This limited-edition collaboration pays homage to all the lovers out there, so Camden is stocking its Marmite Ale at all major retailers: Tesco, Sainsbury’s, Co-op, Ocado, Waitrose or Morrison’s from 13th September. Beer (and Marmite) lovers will also be able to pick up a pack on their next visit to the Camden Beer Hall or from the Camden web shop for £8 for a 4-pack.

Camden Town Brewery’s core range consists of five beers including its award-winning Hells Lager. These beers are available in all major supermarkets as well as around 3,000 pubs, bars and independent retailers.

In June 2021, Camden opened its doors to a brand-new food and drink venue, the Camden Beer Hall. Teaming up fresh beer with fresh food, the Beer Hall boasts 24 taps on the bar, while the menu has been designed by British chef, Theo Randall. Fusing Italian dishes with traditional Bavarian beer hall cuisine, all dishes have been carefully designed to pair perfectly with Camden’s beer range.

Since 1902, Marmite has been the nation’s most loved and hated breakfast spread. It was first discovered by a German scientist called Justus von Liebig who found that brewer’s yeast could be concentrated, bottled and eaten. Marmite is a French term for a large covered earthenware or metal cooking pot. Originally British Marmite was supplied in earthenware pots but since the 1920s it’s been sold in the bulbous glass jars we are familiar with today. Available in supermarkets and independent retailers worldwide, Marmite comes in a variety of sizes, including 70g, 125g, 200g, 250g, 400g and 500g. Marmite is rich in B vitamins including folic acid. Marmite is a British brand made in Burton-on-Trent, Staffordshire by Unilever UK.