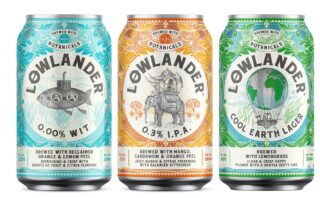 Netherlands botanical brewery, Lowlander Beer, is pleased to announce the launch of two new variants in the UK, Lowlander 0.3% IPA and Lowlander 4% Cool Earth Lager alongside its popular 0.00% Wit beer, available for the first time in Sainsbury’s from today for 16 weeks.

Sainsbury’s will be launching Lowlander 0.00% Wit, 0.3% IPA and 4% Cool Earth Lager in 330ml cans across 70 stores nationwide and online as part of its Taste of the Future initiative, trialling new and innovative products.

Chief Botanical Officer and Lowlander Founder, Frederik Kampman says, “We’re delighted to be introducing two new variants of our naturally delicious beers, as well as our zero-alcohol 0.00% Wit beer to Sainsbury’s customers through this exciting opportunity. Unusually, Lowlander Beer is botanically brewed, using similar herbs and spices to those used to make genever and gin. We believe the time is right to bring our refreshing beers to the Sainsbury’s audience, familiar with botanicals, as well as to lovers of top-quality beer and we’re thrilled to have been selected as one of their Taste of the Future brands.”

Joe Davies, Future Brands Origination and Development Executive at Sainsbury’s, added: “We are really excited to be working with Lowlander to bring their premium botanically brewed beers to a wider audience in the UK and know that our shoppers are continuing to look for innovative, premium beers made with natural ingredients.”

SKU: Lowlander 0.3% IPA – A full flavour non-alcoholic IPA inspired by travels to Sri Lanka, home to the mango, which is one of the botanicals in the beer. Lowlander 0.3% IPA is also brewed with cardamom and orange peel for an unforgettably juicy and aromatic pairing. By brewing the botanicals with just the right intensity of tropical hops and with the late addition of orange peel, Lowlander has created a wonderfully exotic, fruity, thirst-quenching I.P.A. Lowlander 0.3% IPA received a Double Gold award at the European Beer Challenge and a star at the prestigious Great Taste Awards in 2020.

SKU: Lowlander 4% Cool Earth Lager – A clean, crisp and hoppy Pilsner brewed with fragrant lemongrass for a subtle zesty zing. With every can sold, Lowlander adds another plant to a seagrass meadow – a powerful ally against climate change, capturing carbon 35 times faster than a tropical rainforest – in an effort to reduce carbon, protect marine wildlife and tackle global warming.

For any sales enquiries, please contact AStaley@westons-cider.co.uk or ring the Weston’s sales office on 01531 660 100

Lowlander Beer is an award-winning brewery from The Netherlands – literally the Lowlands. Each of its botanically brewed beers has a unique story and a unique flavour. Lowlander’s ‘Chief Botanical Officer’, Frederik Kampman, worked for years in breweries and gin and genever distilleries in both The Netherlands and internationally. ‘As soon as I got into the world of distilling, I was gripped by the number of herbs and spices used. As a beer lover, I started to wonder what these botanicals could add to beer.’ And so, the idea for Lowlander Beer was born: unique, naturally delicious beers brewed with botanicals. Lowlander not only uses herbs and spices but also (re-)uses reclaimed citrus peel from bars and restaurants for their 0.00% Wit beer along with discarded botanicals such as Christmas tree pine needles for their Winter I.P.A. Lowlander’s ‘Tree to Table’ campaign had a global reach of 68 million people in 2019.

Since it was founded in 2016, Lowlander Beer has garnered acclaim from both industry insiders, discerning consumers and media, with listings in over 3,500 accounts across the globe including key cities such as Berlin, Paris and Hong Kong. Other countries include Russia and Curaçao. Lowlander Botanical Beers has won over 35 medals including Best I.P.A. of The Netherlands and World’s Best Label at the 2019 World Beer Awards; a Certificate of Excellence for their White Ale at the 2019 Brussels Beer Challenge and a 2 star rating at the 2019 Great Taste Awards.

The move to making Lowlander available in cans was inspired by their environmentally friendly properties; reducing weight for transport and shipping, easy recyclability and keeping Lowlander fresher for longer in airtight conditions.

Since 1980, the world has lost over 35% of seagrass meadows, which equates to two football fields each hour. The Wadden Sea comprises the largest intertidal seagrass area in Europe at over 200km² yet also has the highest rate of seagrass loss in Europe. Seagrasses occupy 0.1% of the seafloor yet are responsible for 11% of the organic carbon buried in the ocean. Seagrass meadows, mangroves and coastal wetlands capture carbon at a rate 35x greater than that of tropical forests.

Lowlander’s approach is simple, it’s all about underwater gardening to protect and plant seagrass plants to reduce carbon levels for future generations. With the support of dedicated charity, Project Seagrass, to carry out the work, every can of Lowlander 4% Cool Earth Lager sold worldwide generates money which will be put towards creating 10,000m² of seagrass.

Lowlander Botanical Beers are distributed by Westons Cider in the UK. Established in 1880, Westons are a leading premium family-owned cider business and, in Stowford Press and Henry Westons, have premium brands that play major roles in the on and off trade. As part of their strategic plan, Westons work with partners who offer products and brands that have synergies with their own well-established cider business.

Press release from MPR Communications on behalf of Lowlander Beer