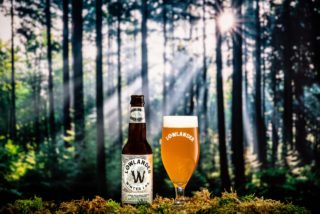 Award-winning Netherlands Botanical Brewery, Lowlander Beer has launched a new Winter IPA brewed with recycled Christmas tree spruce needles as part of their zero-waste ‘From Tree to Tipple’ campaign.  The Winter IPA is available to purchase as a gift pack with five bottles from Not On The High Street and will be available from other good retailers throughout December.

In December 2018, the botanical brewery launched its ‘Tree to Tipple’ campaign; collecting unwanted Christmas trees from Dutch consumers, bars and restaurants in The Netherlands, to transform them into bottles of its refreshing Winter IPA.

Chief Botanical Officer, Frederik Kampman says “Every December, about 2.5 million real trees bring Christmas spirit into our homes. By New Year, most of these end up in the chipper, on bonfires or piled at the roadside. We have found another use for them: in beer.”

Going against the grain, Lowlander made the decision to craft a light White IPA rather than the typical dark beers, common in the winter months. The addition of juniper berries alongside unconventional spruce needles lends the beer a piney aroma, reminiscent of evergreen forests with a hoppy & light citrus character.

Over six hundred kilos of needles were needed to produce the 2019 batch of Winter IPA. In order to collect enough trees, Lowlander partnered with big hitters such as Amsterdam Botanical Gardens and several restaurants, who all pledged to donate their trees after the festive period. Although only the needles were needed to brew Lowlander’s Winter IPA, the brewery re-used every piece of the donated trees in limited-edition products, including bottles of a new creation: Lowlander Botanical Brut, a limited-edition sparkling beer made with spruce and Champagne inspired Riesling yeast, available in the UK from 2020.

Notes to editors
About Lowlander Beer
Lowlander Beer is an award-winning brewery from the Netherlands – literally the Low Lands. Each of its botanically brewed beers has a unique story and a unique flavour. Lowlander’s ‘Chief Botanical Officer’, Frederik Kampman, worked for years in breweries and gin and genever distilleries in both the Netherlands and internationally. ‘As soon as I got into the world of distilling I was gripped by the number of herbs and spices used. As a beer lover, I started to wonder what these botanicals could add to beer.’ And so the idea for Lowlander Beer was born: unique beers brewed with botanicals.

About Lowlander’s Winter IPA (5%)
At the height of the so-called Little Ice Age, the harsh, bitter winters made the canals and rivers freeze over. Amid such cold temperatures, people started to favour beer over wine, because grains had a higher chance of survival than grapes did.

Their 5% Winter White IPA, brewed with spruce needles and juniper berries, combines the hoppy and balanced bitterness of a traditional IPA with the fresh maltiness of a witbier. In 2018, this limited-edition beer was sold in more than 700 bars, restaurants, off-licences and supermarkets, scored 3.56/5 on Untappd, and was also sold in shops in France and Germany.