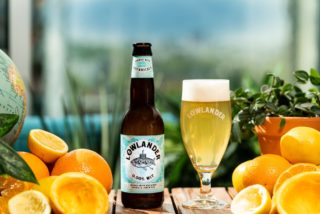 Lowlander Beer, the pioneer of botanical brewing from the Netherlands, has added a no-alcohol beer to its range.  Brewed with reclaimed citrus peel, from bars and restaurants who use the fruit to squeeze fresh orange and lemon juice, Lowlander 0.00% Wit (White) Beer has launched in the Netherlands this month.  The non-alcoholic beer is launching in the UK and Germany and rolling out to other
international markets from May 2019.

Chief Botanical Officer and Lowlander Founder, Frederik Kampan says, “With more than a quarter of young people considering themselves non-drinkers and 1 out of 20 beers being no low or no alcohol, we felt the time was right to launch our 0.00% Lowlander Beer. Consumers are more health conscious and with the trend for no/lo alcohol drinks, we wanted to be one of the first craft beers to launch a true alcohol-free expression.”

“We’re also delighted to be able to reuse natural botanical ingredients to brew our beer. Every year 250 million kilos of orange peel are discarded in The Netherlands and we are working with PeelPioneers who pick up and process this ‘waste’ in a circular, eco-friendly way. The result is a refreshing and crisp botanically brewed beer, with bursts of fruit and citrus flavours.”

Continuing the Dutch exploration theme featured on the Lowlander bottles, the story on the label of Lowlander 0.00% is about Drebbel’s Diving Boat – the world’s first submarine invented in
the 1600s.  Dutch inventor Cornelis Drebbel was invited by King James I to Court and demonstrated the first ever submarine made from a barrel, propelled using oars, to the King and thousands of Londoners on the River Thames. http://www.bbc.co.uk/history/historic_figures/drebbel_cornelis.shtml