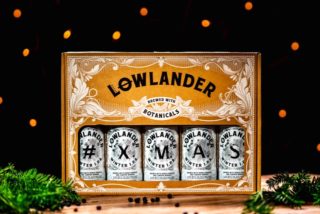 We are excited to let you know that for the first time, Lowlander’s Botanically Brewed Beers are available from Not On The High Street. The two gift packs available for Christmas are the #Xmas Lowlander Winter Beer Gift Pack and the Lowlander Botanical Beer Explorer Gift Pack.

The #Xmas Lowlander Gift Pack contains Lowlander’s Winter IPA, which is brewed with recycled Christmas pine needles. In January this year, Lowlander asked customers in Amsterdam to donate their well-loved Christmas trees instead of throwing them out on the streets as rubbish after the festive period. Sprucing up this ‘waste’ into something delicious, Lowlander collected over six hundred kilos of spruce needles from unwanted trees and transformed them into bottles of refreshing Winter White IPA brew.

Going against the grain, Lowlander decided to craft a light White IPA rather than the typical dark beers, common in the winter months. The addition of juniper berries alongside unconventional spruce needles lends the beer a piny, resinous aroma, reminiscent of evergreen forests with a hoppy & light citrus kick perfect for cold Winter days.

About Lowlander Beer
Lowlander Beer is an award-winning brewery from the Netherlands – literally the Low Lands. Each of its botanically brewed beers has a unique story and a unique flavour. Lowlander’s ‘Chief Botanical Officer’, Frederik Kampman, worked for years in breweries and gin and genever distilleries in both the Netherlands and internationally. ‘As soon as I got into the world of distilling I was gripped by the number of herbs and spices used. As a beer lover, I started to wonder what these botanicals could add to beer.’ And so the idea for Lowlander Beer was born: unique beers brewed with botanicals.