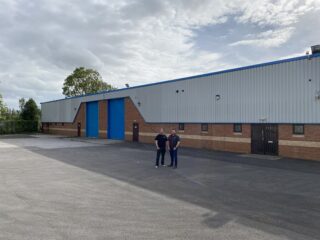 Brew York today announces a £1.5million investment in expansion as it secures a new brewery site and creates 16 new jobs.

A 13,000 sq ft unit at Handley Park in Osbaldwick, York is the latest addition to the Brew York portfolio as the team announce they are pressing on with ambitious plans following a ‘challenging’ few months of trading. The move is set to address escalating demand, both domestically and internationally.

The new site will house the main brewery, immediately increasing production capacity from 880,000 pints a year at the current Walmgate site to close to 4 million pints a year – with scope to comfortably double that again should demand increase further. Work began on the unit shortly after the keys were collected on 1st September, with full operations expected to commence at Handley Park from December at the latest.

Founded in 2015, Brew York had seen year-on-year growth following regular reinvestment of profits with exports to nine international territories including China and Japan. Despite the indisputable challenges presented in 2020, co-owner and Head Brewer Lee Grabham is optimistic about the latest move and says the significant investment in a new canning line just prior to lockdown was key to the position the business is in today:

“The new canning line was a large investment earlier this year, but when lockdown struck it enabled us to pivot the business in a way we wouldn’t have been able to otherwise. At a critical time when cans became the only saleable items we had, we gained the capability to can in one day what would previously have taken us a full week to package. It was a vital part of our continued operations, enabled us to retain our staff, and is a huge contributor to our ability to keep pressing forward with our plans to meet continued demand.”

In terms of the existing site at Walmgate in York, the canning line and large vessels will move over to the new location but the original kit will remain for small scale special brewing projects. For the beer hall, taproom and shop it will be largely business as usual.

As part of the move to the new brewery site, there has been further investment in kit and technology to improve efficiency, quality and consistency. This includes a sizable cold store, a grain silo and mill, as well as a reverse osmosis machine, which strips all mineral content from the water to create a ‘blank canvas’ for brewing. This will greatly improve general quality and enable the production of new styles of beer such as Pilsner which would not otherwise be possible using York’s mains water supply.

“The last few months have been difficult for everyone, and the brewing industry as a whole has been hit really hard. We feel fortunate that we are a flexible business and have been able to adapt quickly. We have a great team here at Brew York who have helped us deal with the change and put us in a strong position to continue to grow despite all the recent and continued challenges. Our customers have been really supportive, buying beer for direct deliveries and returning to our bars to show their support from a social distance! We can’t wait for 2021 and this exciting new chapter for Brew York.”

Founded in 2015 by beer enthusiasts Wayne Smith and Lee Grabham, Brew York’s vision is ‘to make beers with personality that are enjoyed across the globe’.

Independently owned, the brewery started out at Walmgate, York, soon after adding a taproom and shop within the same location. Having executed a successful crowdfunding campaign in 2018, £56k was raised to develop a new beer hall and street food kitchen. In 2020 The Market Tap at Pocklington was added to the Brew York portfolio.

Brew York is known for its quirky beers, comical names and bold, often playful can art. The Yorkshire brewery has made a big impact on the national scene over recent years with stand out beers such as Tonkoko – a vanilla, tonka bean and chocolate milk stout – and Rhubarbra Streisand – a rhubarb milkshake pale. In December 2019 Brew York’s ‘Dame Judi Quench’ beer made a guest appearance on The Graham Norton Show where it was sipped by the star herself.

Today the brewery is multi-award winning, including scooping Gold in the Society of Independent Brewers’ (SIBA) 2020 national award rankings in the  ‘Bottle/ Can IPA’ category for their core beer, Big Eagle.