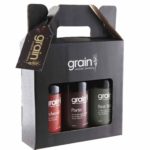 Norfolk’s favourite brewery Grain (www.grainbrewery.co.uk) is this year offering its three champion beers in a gift box – an ideal Christmas gift for anyone who appreciates great beer.

Perfect for the real ale connoisseur or beer novice, the selection contains three champion beers brewed from Norfolk’s fine malting barley, combined with hops carefully selected from across the globe, to create the distinct styles.

The selection include the classic ‘Best Bitter’ (4.2% ABV) and traditional old English ‘Porter’ (5.0% ABV), both winners of CAMRA’s Champion Beer of Norfolk, as well as the rich and hoppy SIBA East of England Champion Beer ‘Redwood’ (4.8% ABV).

The three-bottle gift box is true to Grain’s contemporary and stylish design, usually retails at under £10 and is available at Grain’s regular deli and shop outlets, along with the full range of Grain bottled beers.

Situated in the Waveney Valley area of Norfolk, Grain’s backdrop includes a tranquil river and miles of stunning views across the richest farmland in England. The brewery is located on South Farm using a converted dairy as its brewhouse and cellars. Grain sells cask beer to local pubs, and bottles to farm shops, delis, hotels and restaurants, as well as further afield into the neighbouring counties and London. Grain has left behind the usual baggage associated with real ale, and its beers are enjoyed by a younger market of both sexes, as well as appealing to all who love great beer. Grain is not afraid to push the boundaries and break tradition by experimenting with new flavours and foreign beers styles, such as its cloudy Belgian style witbier Blonde Ash, and the gloriously grapefruity ruby red beer Redwood. Grain has won numerous awards, such as the coveted Champion Beer of Norfolk in 2011 from CAMRA, bronze in the strong bitter category for Champion Beer of Britain and overall champion winner at SIBA’s 2011 East beer competition. Grain is actively involved in Norwich’s City of Ale festival as well as holding its own annual Summer Festival at the brewery with a great range of beers and dancing until dusk. Group tours are also available at the brewery which includes learning about brewing, experiencing the malt and hops whilst tasting a range of beer styles.