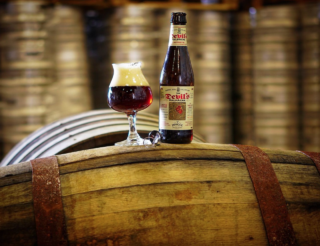 The Porterhouse Brew Co Barrel Ageing Programme, now in its 5th year, is an exploratory programme which aims to develop a series of unique taste experiences with flavours that will continue to age and develop with time. The programme sees Porterhouse marrying the beer with the barrel, using casks from the Dingle Distillery to craft limited edition Barrel Aged beers.

The Dingle Distillery opened in 2012, the second venture for Liam LaHart, (the late) Oliver Hughes and Peter Mosley – the men behind The Porterhouse Brewing Company.

“The Devil’s Halfacre” was first brewed by the brewery in 2013. The name refers to the upper yard of Dublin Castle. This nickname was given by Irish revolutionary, soldier and politician, Michael Collins, after many of the 1798 rebels were tortured there from 1204 up until 1922 when the Irish state gained independence. The Devil’s Half Acre is a stone’s throw away from Porterhouse’s original brew pub on Parliament Street – The Porterhouse Temple Bar, Ireland’s first brew pub.

The beer makes a return in 2019 as the Barrel Aged Devil’s Half Acre. Matured in Dingle Distillery Bourbon casks for 6 months, giving it flavours of toasted oak with cherry notes and a sweet malty finish, the new limited-edition release will be available from late November from most independent off licenses and irishmalts.com.

“Our distillery uses over 20 different cask types from a number of different sources, from sherry to bourbon to champagne casks. As a brewery we’re always looking to push boundaries and innovate our beers. We’re committed to using our knowledge and expertise garnered from both to create new releases that echo our passion for both spirit and beer. The recent Barrel Aged Celebration Stout awards confirm that consumers appreciate the results of marrying our beers with our barrels. We hope the 5th barrel aged release will receive the same response!”  Elliot Hughes, Partner at The Dingle Distillery and Porterhouse Brewing Company.

Barrel Aged Collection Gift Pack | RRP from €15
To celebrate the award-winning Barrel Aged Celebration Stout and the launch of their 5th new barrel aged release, ahead of Christmas, Porterhouse Brew Co has created a limited-edition gift pack featuring the 2-barrel aged beers and stout glass.
Price:                  RRP From €15
Stockists:            Available from most independent off-licences and Irishmalts.com

PORTERHOUSE BREWING COMPANY
The Porterhouse Brewing Company has long been a ground-breaking innovator of Irish brewing. The independent, family run company was established in response to the bland and mass-produced beers from multi-national companies, which dominated the Irish market in the 1990s. In 1996 they opened Ireland’s first brewpub, The Porterhouse in Temple Bar, and in 2017 Porterhouse Brewing Company launched as a brand internationally. Spring 2018 saw the opening of its new state of the art brewery in Dublin, with plans to feature a visitor’s centre, based on examples in the US which will include an events space for hosting live music, parties, street food markets and corporate functions within its unique immersive experience at the centre of the brewery – scheduled for Spring 2019.

THE DINGLE DISTILLERY
Built in a former sawmill on the fringes of Dingle, on the West Coast of Ireland, The Dingle Distillery is Ireland’s first independently owned purpose-built artisan spirits distillery to open in over 100 years. Located on the fringe of Europe, Dingle enjoys a pristine environment like no other. Buffeted by winds from the Atlantic Ocean, the air is fresh, just like the distillery’s own small batch whiskey, gin and vodka. The artisan spirits are hand crafted throughout including the immensely manual mashing process and cut using water drawn from its own well, 240ft directly below. The distillery produces an output of just 2 casks of whiskey a day, alongside its small batch Dingle Original Gin and Dingle Distillery Vodka.

The Dingle Distillery was born out of the success of The Porterhouse Brewing Company, sharing the ethos of independence in a market dominated by big brands. Oliver Hughes, Liam LaHart and Peter Mosley had a vision to bring an artisan craft distillery to the picturesque town of Dingle. The first spirit trickled from the stills in December 2012, winning accolades as Dingle Original Gin and Dingle Distillery Vodka, most recently, Best Irish Gin and Best Irish Vodka, now joined by regular small batches of Dingle Whiskey.