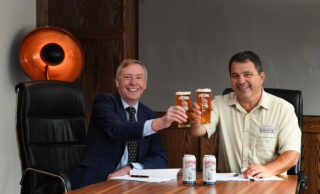 Marston’s Beer Company has reached a long term ‘trade agreement’ with Portland, Maine based Shipyard Brewing Co. ahead of Brexit. The new multi-million pound agreement for 15 years follows a previous successful contract and extends the relationship between the two companies until 2034.

The partnership has been formed over the last decade and stretches as deep as the US based founding partners, one of whom was a former brewer at Ringwood Brewery1 in Hampshire.

Shipyard Co-Founder Fred Forsley visited Marston’s head office to sign the deal and develop plans for the next phase of development for the partnership which will cover exciting NPD plans for 2020 and beyond. The collaboration which already has a 12-year history, has gone from strength to strength as the popularity of USA styled craft beers has grown in the UK.

Shipyard APA, the first beer to be brewed solely in the UK for Shipyard was permanently available in 2013 and has gone on to be the UKs biggest selling craft keg beer2 and Shipyard IPA continues to grow in the off-trade and commands the PBA category’s highest rate of sale3. In June 2019, Marston’s launched Low Tide, Shipyard’s first low alcohol alternative into the UK market.

Fred Forsley commented: “This new commitment is a fantastic news, a dream come true for Shipyard in that we continue to work with a business which has become our extended family – walking into pubs and seeing our beers on the bar or in supermarkets in the UK is a huge buzz. Marston’s is a great business partner and our relationship runs very deep. Our long-term plans are exciting and we are both looking long into the future which allows us to focus on the beer and not on contract durations.”

Richard Westwood, managing director, Marston’s Beer Company added: “Marston’s and Shipyard has been a real success story for UK brewing industry and is a real testament to the uniquely close relationship we have developed and the trust we have built between our businesses.”

Shipyard is based in Portland, Maine, USA and was founded in 1994 by Fred Forsely and former Ringwood Brewery head brewer Alan Pugsley.

It is the UK’s leading brewer of premium cask and bottled ales.

It has 14 National depots across the UK and over 120 dray lorries that deliver beer all of the UK around the clock.

1 Alan Pugsley, former head brewer at Ringwood Brewery until 1992 when he left to set up Shipyard Brewing Co in Portland, Maine. Upon starting Shipyard in 1994, Alan and his business partner Fred Forsley continued to solely brew Old Thumper for the US market and work on collab brews with Ringwood Brewery. Ringwood Brewery was acquired by Marston’s Beer Company in 2007 which is when an official partnership formed between the two brewers and Shipyard was officially brought to the UK market.

For more information on Shipyard and/or Marston’s, please contact Lauren Hagan at their press office, Vital on 01926 338811 or lauren@thevitalagency.co.uk